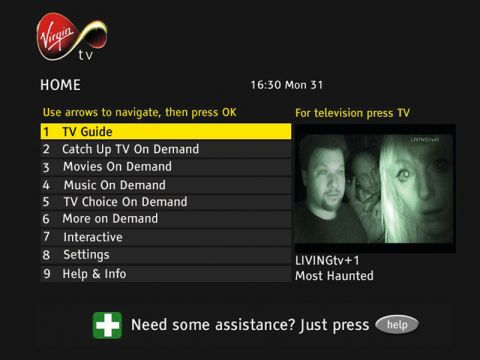 Virgin claims to offer at least 4,600 hours of VoD and its seven-day catch-up service comfortably beats those of Tiscali TV and BT Vision by encompassing BBC iPlayer (including HD with shows displayed in a modified version of the standard iPlayer interface), ITV Player, 4oD, Virgin Media 1, Living and Bravo.

'Virgin Central' is a showcase for episodes of popular and new series (including HD) and broadcasts from Virgin's V Festival.

Unlike BT Vision and Tiscali, only subscribers to its top tier XL TV service get free access to Virgin's archive – TV Choice – which otherwise costs £7 a month. This hosts entire series of comedy and drama shows like The Sopranos and Torchwood as well as children's shows – some in HD.

Being cable-based, the service is unfettered by the bandwidth restrictions of BT and Tiscali so has more HD on offer for those with Virgin's triple-tuner V+ box PVR.

Filmflex offers films in standard and high definition. Newer releases appear from within six months of cinema release. Rentals range from 99p to £4.99 for HD and can be watched as often as you like within 24 hours.

You can also watch HD and SD movies from Picturebox for £5 a month and adult movies from The Adult Channel, Playboy and Television X with unlimited replays in a 16-hour period and costing £5 for SD and £6 for HD.

The remaining HD output is limited to the odd show from selected channels such as FX including True Blood and Dexter, HBO shows such as The Sopranos and Band Of Brothers and what's on offer for free on BBC iPlayer. It could certainly do with a wider range of the latest US imports (shows from Sky1, for example).

We hope that Virgin Media's promise to introduce more HD channels and rekindled relations with Sky leads to an expansion of its HD VoD content soon.