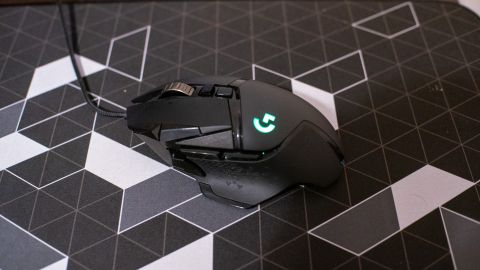 Logitech’s new Hero sensor improves on the landmark G502, but a few build improvements may have helped it better keep up with SteelSeries’ best.

Maybe you're wondering why we reviewed the Logitech G502 back in 2018. The reasoning is sound: this mouse is so good that Logitech has kept it around for years, and the upgraded Logitech G502 – as well as its wireless model, the Logitech G502 Lightspeed – gave us an extra reason to go back. The classic mouse design is still here, but with a new sensor to make it compete with the best gaming mice on the market.

While some will love the design, its sharp, angular look makes it an odd fit outside of gaming scenarios. It’s also built around a lot more buttons than the typical mouse, so not all grip types will be comfortable. But, for those that like the design, there’s almost nothing not to like.

Given just how good those competing mice are, the Logitech G502 Hero really only wins if you desire the design or have a use for all the extra buttons.

If you’re familiar with the previous iteration of the G502, don’t expect to see much change on the outside. It’s still the dark, moody, angular, Batmobile-like mouse that it’s always been. It looks odd in an office environment but fits in a gaming battlestation just fine.

The build combines matte black plastic for the primary buttons and grips, and puts glossy plastic between the mouse’s aesthetically different sections and on the extra buttons. The matte plastic does a good job of hiding hand grease, but the glossy plastic fares worse.

The scroll wheel is shiny, metallic and neatly notched. A button just behind the scroll wheel toggles the notched scrolling, and it’s a real delight with pronounced clicks. Toggling the mouse for infinite scrolling lets the wheel spin so freely that a good flick can keep it spinning for over 10 seconds. Terms of service and other long documents have never been easier to not read.

Though the G502’s overall build quality feels sturdy, all the hard angles almost make it seem like this mouse could draw blood. The two buttons to the left of the primary click also oddly hang over the edge and feel as though they could snap off easily.

The G502 Hero features customizable RGB lighting for the DPI indicators and Logitech G logo. Both lighting zones are smartly placed so they’re visible between your thumb and index finger when holding the mouse. By default, the DPI indicators don’t stay lit though.

For the most part, button placement is good. The three thumb buttons are easy to distinguish by feel, well within reach, but hard to misclick. Some people may struggle with the two buttons on the left of the primary mouse button. We keep them set to DPI switches, and the forward most one is easy enough to accidentally hit and feel the whiplash of a suddenly much faster mouse.

The G502 Hero isn’t the most comfortable for larger hands. It’s a bit on the thin side, and the side grips don’t offer much traction. A claw grip works well enough, but deeper grooves and a softer rubber finish would offer a more trustworthy hold.

A compartment on the bottom pops open, allowing the addition of up to five 3.6g weights that can give the G502 Hero a nice heft.

The Logitech G502 Hero features the 1,000Hz polling rate and 1ms response time as expected from a proper gaming mouse, and we hardly notice any shortcomings in this department. But, the Hero sensor is what helps the mouse shine.

The Hero sensor offers flawless tracking from our experience with it. It supports a DPI range from 100 to 16,000, though we find the upper limit largely unimportant. What matters is how well it responds to our hand movements and how consistent it is. We never notice odd mouse movements. And, thanks to tracking at max speeds over 400 inches-per-second and max accelerations over 40Gs, it’ll be hard to push this mouse past its limit.

We went through a lot of Black Ops 4’s Black Out mode and plenty of Overwatch to see how it kept up with the split-second reaction times and high precision required in each game, and it didn’t let us down in the slightest. Our only pain point comes from how often we manage to misclick the button that increases DPI, and suddenly we’re at 5,000 DPI instead of 2,500.

The switches underneath the buttons feel great, giving a responsive click with minimal actuation force. There’s enough resistance to keep us from misclicking while resting our finger on the buttons, but none feel too squishy.

Logitech’s customization software is fairly easy to use and highly advised for a mouse with this many buttons. To make the most of the G502 Hero, you really need to have a plan for all the buttons.

A game like Overwatch may not benefit from having so many buttons, unless you demand quick access to all your voice lines, but a game like Rainbow Six Siege can benefit from the having all your gadgets and movement options within easy reach. Adding lean left and right with a flick of the middle scroll wheel can enable some advanced maneuvers that would be harder with the game’s default controls.

For the brilliant performance this mouse gives, and the incredible flexibility provided by all its buttons and weight customization, we give it a solid thumbs up. But, we can’t ignore the giant shadow cast over it by SteelSeries.

The Hero sensor may boast a higher max DPI and max tracking speed, but the TrueMove 3 in SteelSeries’ latest gaming mice is effectively flawless in our book. And, the TrueMove 3+ adds a secondary sensor that takes accurate mouse control to the next level with advanced liftoff detection. The comfort and construction of the Rival 310, Sensei 310, and Rival 600 is also top-notch.

While some hands will love the feel of the G502 Hero and the ample buttons it offers, the best wired gaming mice from SteelSeries don’t cost any more and offer effectively equal performance and more options for different grips.