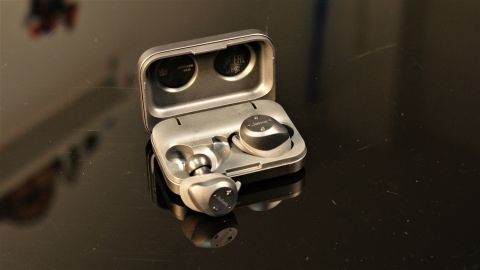 An excellent set of AirPod rivals in many ways, and massively powerful in terms of the amount of exercising you can do. A touch too expensive perhaps (a lower price and they'd be a must-have), and the heart rate monitoring could be more accurate, but the sheer volume of training options is brilliant.

I really love the idea of wireless earbuds, because… well, they’re just cool. I’ve been using the Apple AirPods on and off for a couple of months, and while the fit on those is terrible and the functionality poor, there’s something amazing about just shoving two buttons into your ears and hearing music.

The Jabra Elite Sports aren’t cheap by any means (The opening RRP of £230 / $250 / around AU$330), but they promise so much. These things can track your run, monitor your heart rate, guide you to get stronger or push you to your max during an indoor high-intensity interval workout.

The price is much less around the world now though - just check out the price widgets on this page to see how much more cost-effective these buds are.

In short, they’re a mixture of the Jabra Pulse (heart rate-monitoring) and Jabra Coach (fitness-coaching) headphones and shed the wires – these things could be big.

Actually, the Jabra Elite Sports are more than just big – they’re huge. The idea is pretty good: they sit snugly in your ear canals and push the optical heart rate monitor against your skin to give one of the more accurate heart rate readings, according to scientists who know more about this than I do.

With no charge out the box, I had to plug in the anonymous-looking black case the buds live in when they’re not in your ears, wait an hour for them to charge up, and then shove them in my lugholes. There’s a huge range of tips and wings to give a decent fit, and while it takes a while to put the right ones in, the fit is certainly snug.

You’re not enticed to download the Jabra Sport app for some reason (at least not on the Samsung Galaxy S7 Edge I was using, along with the iPhone 7 Plus) but the in-box literature pushes you there, and without the app you can still listen to music over Bluetooth.

Open the app and you’re – weirdly – asked to re-pair the earbuds with the app, despite already having done so. It took a couple of tries but eventually the headphones were paired, then you’re asked to put in your vital stats to monitor health effectively.

I like that Jabra wants to check the heart rate monitoring is working correctly by asking you to stand still and then jump around for 15 seconds… I’m never by myself when I get this command so I look like a right fool.

The first time I tried this, I could NOT get the heart rate to work. Over and over I removed the headphones and tried to get them to fit better – in the end I gave up.

(As you'll see later, this was due to an issue with the firmware that's now been solved).

While this test is supposed to be a running test, there’s so much more to the Elite Sport headphones that I’m going to try out the cross-training workouts too.

I was pressed for time this morning, so I just chose the five-minute ‘PushPerfection’ workout, which comprised of push-up reps and timed planks (and variations thereof).

The thing that Jabra is talking up is the fact that you don’t need to have the phone in view to do this – it’s all guided through the headset.

I gave it a go… nope, you need the phone. Firstly, at the start and end of every exercise I was told to press the button and be told what the next exercise is – but without looking at the phone it’s hard to know what ‘Push-Ups with Rotation’ means.

And pressing the button on the side of the headphones is SO SO PAINFUL. It’s quite stiff, so you’re jamming these large buds onto your fragile ear bits. Ow. I hated touching the buttons at any point… this should be touch-sensitive.

(Update: Newer versions of the product - likely those that most will purchase - have had the plastic underneath softened. I've tried these and the pain is certainly lessened, although it's still not easy to press the buttons when you're working out).

Also, I was under the impression the reps were going to be counted. But they weren’t. Something was up here.

I finished the workout and was pleased overall – it was easy to get through, with a good range of effort needed. While the execution wasn’t great, the workout was good and well-guided when looking at the phone.

At this point I noticed that I was being encouraged to download new firmware… I did this and everything started working. The heart rate clicked in, the button worked to skip through exercises – I’m looking forward to trying this tomorrow.

This afternoon it was run time – I needed to pop out and hit 10K, so decided to try the app at that. The first thing it asks me when opening up the running section of the app is to do a VO2 Max test, to assess my fitness.

Apparently I should do this every four to eight weeks to see how I’m improving, with green zones to show me how fit I am.

I did a couple of kilometers to warm up, and then got into it. This was simple enough: run for 15 minutes at 70% effort or above, with the app telling me if I needed to speed up (I’ve no idea how these new headphones knew how much effort 70% was for me – I’m thinking some guesswork goes on here).

I went all-out for 15 minutes – I was told four times during the workout that I had achieved the ‘target training zone’ (which irritated – surely I can only reach it once?) but overall I gave it a hard push.

I got the results: my fitness was ‘good’. I had a VO2 Max of 50. Now, I don’t mean to sound boastful, but I’m definitely in the ‘excellent’ category (when you sacrifice a large portion of each week to run, you know when you’re at a decent level of fitness).

I’ve had lab tests done which tell me I’m hovering around 60 – and the heart rate recorded seemed a bit low too, leading me to wonder if the fit wasn’t quite right.

I decided to have another go – another 15 minutes of consistently-paced running with a stable, flat surface as the app suggested. End of the test… still ‘good’, but only a score of 51. OH, COME ON!

So… I’ve learned that this thing is going to need more than two tests to learn my physiology properly. The running tracking is good, but needs the phone – which makes sense given that the Elite Sports are just headphones.

The cross-training tracking is OK as well – I really like the breadth of workouts, but I need to figure out why the headphones aren’t tracking my reps like they’re supposed to.

I’m also a bit worried about how big the Jabra Elite Sports are – they’re hurting my ears by how much they fill the canal, with the pain radiating down to my jaw. I’ll try some smaller tips to see if that has an effect.

Tomorrow I’ll be doing a harder strength session and easier run to see how the headphones cope, as well as comparing the heart rate monitoring to a chest strap monitor to test accuracy, to see if these headphones are worth the high price.

Next Page Day 2: a painful fit