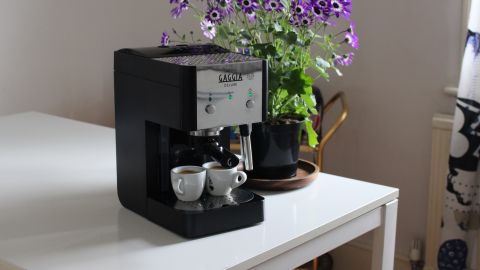 Gaggia champions the traditional craft of espresso, and while the Gran Deluxe may not be all-singing, all-dancing, it gets the job done in superb style.

After trying out the Sage’s Oracle Touch, Nespresso’s Vertuo and Melitta’s Caffeo CI, Gaggia’s Gran Deluxe has a tough act to follow. If you’re looking for a coffee machine that can create impeccable microfoam by itself or remember your name and chosen latte strength at the flick of a button, look elsewhere. But after spending some time getting to know Gaggia’s old school ways (such as priming the machine and the lack of touchscreens to rely on), we realised the appeal is quite different: Gaggia creates a brilliant at-home espresso from a chic machine you’ll fit into even the smallest kitchens. Expect to pay £139 in the UK, while the US's equivalent sells for around $240.

Even if you’ve never come across a Gaggia machine before, it’s no stretch to call the company’s founder, Achille Gaggia, the godfather of espresso. The Italian coffee bar owner invented the first lever piston espresso machine in 1948. His steamless machine forced water to flow over coffee grounds at high pressure, producing the illusive crema unique to espresso.

Although now owned by Philips, Gaggia’s machine looks great, and is so compact, we can’t think of a kitchen you wouldn’t fit this in.

After a few days of use, we have to say some elements do feel a little cheaper than we expected from a Gaggia: the machine is plastic-bodied with a metal front, and you’ll find the espresso filter holder is also plastic. Day after day, we missed the weight of a heftier machine, but there’s no denying the chic design credentials of an Italian classic.

If your coffee aspirations stay in the puritanical, you’re going to love getting to know the Gaggia. It’s the go-to for reliably great espressos, and the steamer wand produces compact, excellently foamed milk. If you have artisanal or ‘third wave’ coffee scene creations in mind (flat whites and latte art), it’s going to take some practise.

The pannarello steam wand is a good size, so you can reach to the bottom of most milk jugs and control how much foam you get. However, the Gaggia doesn’t provide a temperature gauge to tell you when to stop steaming, which we found tricky after relying on the insight of some of the pricier machines on the market, but again - the Gaggia feels a bit like going back to basics.

Know your stuff, and the pannarello wand is a great way to get up to scratch with latte art, but it takes some doing. After a few attempts, we were able to get the right air and steam going to create microfoam, but getting the milk to the right temperature was still hard (judging by eye alone!). If that’s something that would get to you too, we’d recommend buying a temperature gauge yourself.

There's also just 75mm of clearance underneath the espresso handle, so we couldn't fit a regular mug under. You'll need to buy some smaller mugs or espresso cups and decant the coffee into a large mug if you want to make longer drinks, such as an americano.

However, considering it’ll cost you less than ten per cent of the price of an Oracle Touch, learning the traditional espresso method may be right up your street if you’re on a budget.

Searching for a machine that gives you the freedom to control your coffee making process? You’ve hit gold. Espresso machines further up the price scale are all keen to take this out of your hands, but we found the Gaggia was perfect for raising our real at-home barista game.

Temperature gauges and on-screen instructions are nowhere to be seen with the Gaggia, so suddenly there’s a lot more control, alongside variables you missed when something else was doing it for you. You’ll need to prime the machine before you start - the ensuing confusion for us was a reality check after thinking our coffee making had come along a fair way. It hadn’t, and the Gaggia shows every misstep.

But the Gaggia isn’t the godfather of crema for nothing. The Gran Deluxe comes with a pressurised filter holder, known as the Crema Perfetta Filter Holder. The pressure within the filter holder is designed to extract the best level of taste and aroma from your coffee beans. The design is a little strange to get used to at first, as the handle is sprung so it moves around when you turn it, but it does the trick - if you want to skimp on freshly ground beans, we tried it using packet ground coffee too, and it was still delicious.

We also loved that there’s no attempt to steer a user into a ‘system’ or coffee bean style. Easy Serving Espresso (ESE) pods and fresh ground beans alike are fine - Gaggia leave that up to you.

With such a classic design, there’s not much by of eco-credentials taken into account with the Gran Deluxe, but using ground coffee as opposed to ESE pods will help with reducing waste.

Gaggia is a prestigious brand, and for an affordable espresso machine you can actually see yourself paying off over time with saved trips to the coffee shop, it doesn’t get much better than the Gran Deluxe. It has plenty of functionality for making crema-topped coffees and punchy americanos, as well as flat whites and lattes if you’re willing to put in the practise. No, it doesn’t do as much of the hard work for you as other pricier machines, but for its price range, we’d argue it’s the best on the market, and definitely worth the initial investment if great coffee is a daily highlight.