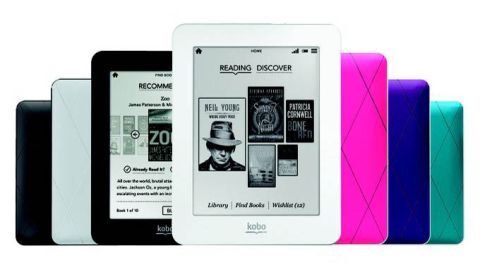 The Kobo Mini is very portable, and the e-ink display is adjustable

If you'd rather not travel with a high-end tablet and think that even a Kindle is too big to carry on the daily commute, the touchscreen Kobo Mini could be the e-reader for you.

At a mere five inches across the diagonal, it's the tiniest e-reader we've seen since the Sony Reader Digital Book PRS-300, though it's not the slimmest.

At just a centimetre (0.4 inches) in depth, the Kobo Mini is relatively bulky, though we can't argue that it's too heavy for long-term travel; at 130g (4.73oz) it's a mere slip of a gadget.

And slip it we did, into a variety of bags, pockets and briefcases, though this is one e-reader that you should keep close to your body; we managed to house it in jeans, as well as some shirt pockets, though the advisable addition of a protective case could seriously interrupt that.

Perhaps just as important as size for anyone after an e-reader to take on a business trip, commute or picnic is battery life.

The Kobo Mini uses an e-ink screen - though a rather low resolution version, at just 800 x 600 pixels - that negates the need to pack a charger, with battery life rated at about two weeks.

That's with its built-in Wi-Fi de-activated, which you'll probably forget to do.

This Canadian-designed e-reader is, on the inside, identical to the latest generation of Kobo e-readers, including the Kobo Glo and Kobo Arc.

But priced at £59.99/AU$99.99/US$79.99, it's considerably cheaper than its bigger specced brothers, as well as rivals such as the Kindle Fire, the Nook Simple Touch and even the cheapest Amazon e-reader, the Kindle.

Kobo's online e-book shop is accessible from the Kobo Mini, while other new features of the refreshed operating system include both Reading Life (which monitors your progress), Shelf (folders that can be created to house specific books and documents), and a book wish list on the Kobo store.

Frequent travellers without the time to stock up on books before setting off to the airport might mourn the lack of 3G connectivity on the Kobo Mini, but it's a pointless spec too far for most.

Who really needs to be able to download a book anywhere, anytime? Not anyone with more than two books on their device, that's for sure. Besides, the Kobo Mini can store about 1,000 e-books.

That lack of 3G and non-book-related apps of course help to keep the cost down to a mere fraction of the price of an iPad Mini, Microsoft Surface, Samsung Glaxy Note or other top tablets.

Fashionistas with low horizons should know that 'SnapBacks' in red, purple and teal can be bought from Kobo and swapped-out for the default grey cover.

Design-wise the Kobo Mini is nothing special; it comes in either black or white, each sporting a silicone outer layer that's easy to grip in one hand.