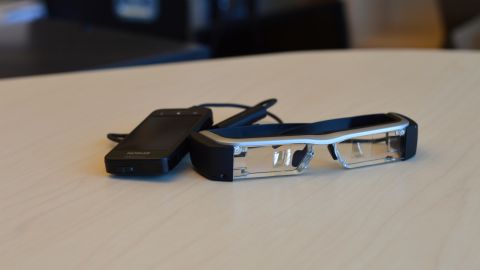 With a clunky design an interface in dire need of an update, it's best to avoid the Moverio BT-200 smart glasses and wait for what Epson cooks up next.

Augmented reality is an older technology but, like virtual reality, is starting to regain attention again.

Mostly known for making printers and sensors, Epson branched out into the world of AR with the Moverio BT-100 a couple years ago. The design was clunkier and was solely for enterprise purposes.

The new Moverio BT-200 model remains a cumbersome device but after shedding 60% of its weight, is far sleeker than the BT-100 and offers up more features that take it beyond the office space.

Still, at $699 (£568, AU$849) a pop and fairly experimental, Epson has a ways to go to make the augmented reality device more accessible for everyone.

A colleague of mine noticed me testing out the BT-200 and said, "I can't decide if that's the coolest thing ever or the most ridiculous." It's true, the glasses look a bit silly though when the shades are popped on, though they don't look as odd and instead take on a futuristic visage.

The BT-200 are also a far cry from Google Glass. Where Glass is just a tiny speck seen from one eye, this Moverio model fits on your face like normal spectacles - except they're larger and reminiscent of coke bottle glasses.

A bendable nose-guard sits on the inside, allowing you to better fit the glasses to your face. It also can lay flat on top of prescription glasses. Further adjustments can be made with the plastic arms and rubber stabilizer fins.

Wearing these outside of the house or office is frankly, something I can't see happening. In fact, I can't even imagine anyone wearing them in the office. They're not attractive and downright awkward.

The new Moverio smart glasses project a transparent 960 x 540 resolution display (yes, it appears the resolution has been decreased since the BT-100) in front of wearers' eyes using two "Ultimicron" ultra-compact, high-resolution, full color LCD projectors that are capable of projecting 3D images.

The glasses are fully transparent but two removable covers provide varying degrees of contrast and have been useful for Netflix or gaming. There's also a lens insert for prescription glasses which you can ask your eye doctor to fulfill.

I was pleased to see that I could use the BT-200 over my own glasses because I couldn't really use my own frames with Google Glass. However, it wasn't a comfortable experience and the combined weight forced me to hold the whole thing up on my face to stop it from sliding off. Now that I think about it, generally speaking the Moverio really pushed down on my face.

The discomfort may have been due to my heavy frames though. With lighter frames, the BT-200 actually sit and stay on pretty well even when walking around. One colleague of mine didn't experience the extra weight sliding around when he used them and his prescription glasses aren't as large as mine. Other colleagues who didn't wear glasses every day didn't like the feel and couldn't get the nose-guard to adjust properly, but didn't think it was excessively weighty.

After hearing impressions from several people with different face shapes and eyesight requirements, I think it's safe to say that the BT-200s aren't for everyone.

Next Page Features, performance and verdict