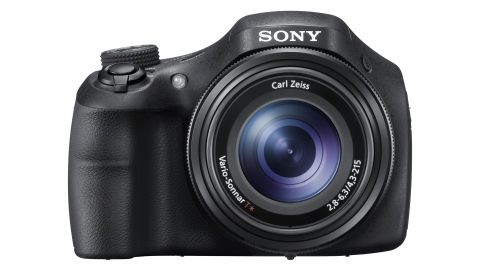 The Sony HX300V has a big zoom

Seemingly it takes a big camera to outsmart a smartphone these days, and the DSLR-styled Sony Cyber-Shot DSC-HX300 bridge model is a big camera in several ways.

First, it has physical heft, the body being larger than Canon's EOS 700D DSLR, albeit with a deeper, more comfortably rounded handgrip on the Sony.

And secondly, there's the key reason for this Cyber-Shot's existence: a huge, class-leading 50x optical zoom range using an enthusiast-baiting Carl Zeiss Vario-Sonnar T lens to cut down on lens flare and reflections.

This is backed up by an equally large pixel count, courtesy of a 20.4 megapixel 1/2.3-inch Exmor R CMOS sensor. Image stabilisation is claimed to have been refined over previous Cyber-Shot cameras, as is autofocus speed.

Sony goes as far as to suggest AF is twice as fast as its HX200V predecessor when shooting at maximum telephoto, while it additionally offers a couple million more pixels than that model.

OK, let's get some of our gripes out of the way first. Despite the snapshot camera-sized sensor, there's the entry-level DSLR asking price of £419 / AU$599 / US$499.99, and for that the Sony HX300 bridge camera misses some of the latest must-haves.

For example, there's no built-in Wi-Fi antenna, which is offered by the slender 20x Sony WX300 model. Neither is there GPS or weather-proofing provided, that its sophisticated-looking outer shell might suggest.

More positively, we do get the useful unison of both a tilting 3-inch, 921k-dot LCD screen at the rear plus an electronic viewfinder ranged directly above. This combination enables either hip-level or eye-level shooting, dependent on your compositional preference.

In terms of other headline features packed into the camera, let's turn our attention back to that jack of all trades lens. Here it provides a 35mm equivalent focal range of an ultra-wide 24-1200mm if shooting in standard 4:3 digital photo aspect ratio, or 26-1300mm if opting for 16:9 widescreen imagery, as you do when shooting video.

Maximum aperture is a reasonably bright f/2.8, dropping to f/6.3 at the extreme telephoto. Shooting at the Sony HX300's widest setting, close ups down to 1cm are possible.

Inevitably there are also several digital zoom options, with up to 200x accessible at 20MP, which can be pushed up to a ridiculous 810x if you're happy to shoot at a much-reduced resolution of 640 x 480 pixels.

With picture effects - via built-in digital filters - creeping into every imaging device from DSLRs to handsets and tablets, the Sony HX300 naturally has a smattering of these too.

Sony has, however, concentrated on the essentials rather than going overboard. Thus we get a choice of nine options: HDR Painting, Richtone Monochrome, Miniature, Toy Camera, Pop Colour, Partial Colour, Soft High-key, Watercolor and Illustration. Naturally we also get Sony's proprietary self-stitching Sweep Panorama feature included throughout the Cyber-Shot range.

Thankfully, though, there is the ability to pluck from a broad gamut of ISO settings, here ISO 80 to ISO 12800 in Superior Auto mode, or fall back on integral flash of the manually raised pop-up variety.

However, there will be those who are disappointed that such a heavyweight camera in many respects offers just the choice of JPEG capture rather than raw file capture. This indicates that the Sony HX300 is a better fit for the family user rather than the hardcore photo enthusiast who might otherwise find something of value here, such as the 10fps burst mode courtesy of Sony's absurdly named Bionz processor, and Full HD 1920 x 1080 pixels video shooting at 50p (Progressive) for cinematic type results.

Battery life is good for around 310 photos or 155 minutes of moving footage, which is comparable with the rest of its class, if nothing particularly special.

The chief appeal here, though, will be the Sony HX300's ability to capture a wide range of subjects at a wide range of distances, without having to either swap the lens or take a step forward or back to achieve the framing desired.

In other words, there are plenty of options available to you, with minimal fuss required.