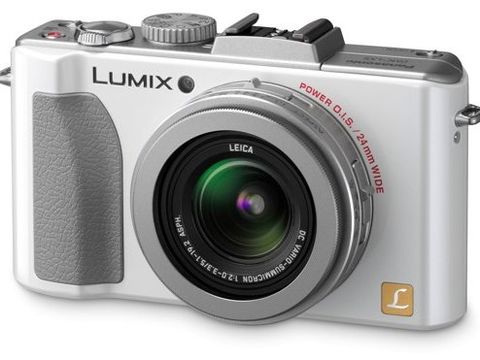 The Panasonic Lumix LX5 is a refresh of the popular Lumix LX3, a well-regarded power compact that's also caught on as a D-SLR replacement.

Update: See our video review below

The first thing you notice about the Lumix DMC-LX5 is that it feels more compact and pocketable at 110 x 66 x 43cm than the LX3, and the metal body is really sturdy.

Panasonic has junked the joystick controller in favour of a clickable control wheel, and there's also a slider around the lens for changing aspect ratio (a mixed blessing, as we'll see later). A simple movie-record button's been added too, making it very easy to record 720p HD video in AVCHD or Motion JPEG format.

Onto the more significant improvements of the Lumix LX5 . These include a 10.1 megapixel sensor with an eye-poppingly high ISO range of 80-12,800, and a 24-90mm equivalent lens (f/2 maximum aperture).

In terms of positioning and competition, the LX5 sits below Panasonic's interchangeable-lens hybrid cameras, but lacks the power zoom of the new Lumix FZ45.

It's currently selling for around £360, so while this isn't a particular cheap D-SLR replacement, it's a very convincing rival to the Canon G11 (also sporting a 10.1 megapixel sensor, high ISO range and 28-140mm lens). Panasonic's clearly going after the G11, so will it win this power compact challenge?