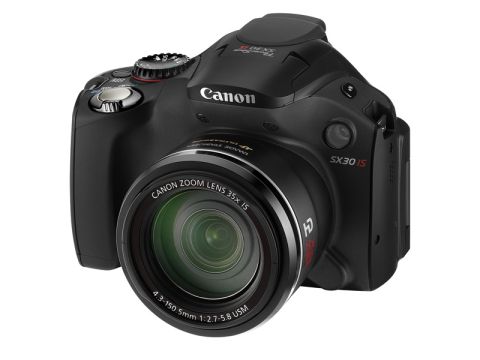 We are used to digital bridge cameras having wide focal length ranges, but the 14.1-million-pixel Canon PowerShot SX30 IS is a little bit special because its 35x optical zoom gives the SX30 IS a focal length range equivalent to 24-840mm.

Just to be clear, that's the Canon SX30's optical range at full resolution and it doesn't include the digital zoom which can extend the reach to 140x.

Having such a phenomenal range should make this new Canon PowerShot camera ideal for a whole raft of photographic situations, from shooting in fairly confined spaces indoors and taking shots of wide, sweeping vistas to photographing distant wildlife.

The PowerShot SX30 IS's lens features Canon's most advanced optical Image Stabilizer, which assesses camera shake around 8,000 times per second and is claimed to extend the safe hand-holdable shutter speed by up to 4.5 stops. Obviously this can't deal with subject movement when shooting wildlife, but it is a big help with cancelling out the involuntary camera movements that are an issue with very long telephoto optics.

Interestingly, Canon has used three Hi-UD (high-refractive index, ultra-low dispersion) elements, which are normally reserved for broadcast-quality video optics, to reduce the overall weight of the SX30's lens and keep the overall mass to a manageable 601g (including battery/batteries and memory card).

While the SX30 has a host of novice-friendly automatic scene modes, more experienced photographers will appreciate the option to shoot in program, aperture priority, shutter priority and manual modes. At the widest point aperture can be adjusted in 1/3 EV steps from f/2.7-f/8, but at the longest point on the lens this drops to f/5.6-f/8. Meanwhile shutter speed varies by shooting mode, but the maximum range (which is selectable in shutter priority and manual mode) is 15-1/3200 sec.