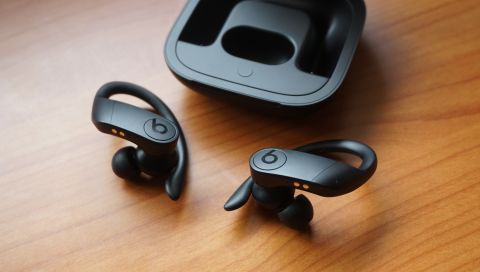 The true wireless Powerbeats Pro a big step up for the Apple-owned headphone brand. They have their limitations (see: lack of noise-cancellation, limited noise isolation and IPX4 rating), but they are Apple’s most premium workout buds.

The Powerbeats Pro are the next logical step for Apple's series of workout-focused earbuds – true wireless is the way of the future, obviously.

And while Apple could've churned out a half-decent, sweat-resistant pair of true wireless buds and called it a day, the Powerbeats Pro are something special – they’re supremely comfortable, sound decent and seem to never, ever fall out.

They might not be the best true wireless earbuds in Apple's audio arsenal now that the AirPods Pro are here, but they are Apple’s most premium play into the true workout space, and are the buds we'd recommend to most workout enthusiasts.

Still, what you're getting with the Powerbeats Pro is the significantly improved design, new H1 Chip and a better sound quality than the Powerbeats 3.

In terms of design, there’s a lot to like about the new Powerbeats Pro - it has a sport look to it, while still being practical enough to wear around outside the gym.

On each of the two earbuds the Powerbeats Pro have a center playback control button where the Beats logo is, plus a volume rocker. That means you can control your music with whichever hand is free, which is a nice feature. (Of course, if you have Hey Siri enabled, you can simply say the wake word with a voice command for the same effect.)

If you’ve used other true wireless headphones in the past, you might recall feeling a sort of in-ear pressure while listening to music. It’s something we’ve certainly felt while listening to other workout earbuds like the Jaybird X4, but that uncomfortable pressure simply doesn’t exist with the Powerbeats Pro. That’s because of a micro-laser barometric venting hole in the front chamber that, in Apple’s own words, reduces pressure in the ear and improves the bass response… not that Beats headphones needs any help with bass levels.

Another factor that contributes to the excellent fit is how slim the nozzle of the earbuds are - it’s smaller than a lot of other true wireless earbuds on the market and with four different ear tip options, there are still plenty of ways to get that perfect seal.

One issue with the Powerbeats Pro's design is that they do jut out of the ears a bit, and don’t have quite the same low-profile look as the Apple AirPods. This is also kind of an issue if you want to wear headphones to bed, as when you lay down with them in your ear, it pushes them uncomfortably far into the ear canal.

The other issue, and it’s something other reviewers harped on as well, is that the Powerbeats’ case is enormous. It’s the kind of thing that looks awkward in your gym shorts and can be a hassle to carry around in your pockets. It feels like the only place the headphone case belongs is in your gym bag or locker, and that’s kind of disappointing if you want to wear the Pro while you work at the office.

Apple’s rebuttal to that statement is that the Powerbeats can last up to nine hours in between charges and store about two charges in the case. When you combine those numbers, Apple claims the Powerbeats Pro have a 24-hour battery and should last a few days between charges - a claim to be fairly accurate during testing, getting two and a half charges from the case with about eight-or-so hours of use per charge.

Unfortunately, however, if you want wireless charging, you won’t find it here. If you want to stay within the Apple family, only the latest versions of the AirPods have that feature so, for now, you’ll still have to use a lightning cable to charge the case every few days.

Like other AirPod products, the Powerbeats Pro are the most at home when paired with other Apple devices. On iOS, pairing up the Powerbeats Pro is as simple as opening the case near your iPhone or iPad. Two touches later and your devices are synced.

As with the AirPods, you can then open the case to see how much battery life is left on your iOS device, and that helps further their space-age feel. (It would’ve been nice to see their battery life in the top-right corner of the home screen like we’ve seen with other true wireless earbuds, but that’s not a dealbreaker.)

That said, the Powerbeats Pro aren’t Apple-exclusive and will work with Android and Windows 10 devices - all you need to do is hold the pairing button inside the charging case and select the Powerbeats Pro on the device you want to pair. There’s almost no difference in sound quality that we could hear between a paired iOS device (our iPhone 8) and a paired Android device (our Google Pixel 3a XL), as both connections use Bluetooth 5.0.

One of the key reasons you’d want to use an Apple device is to take advantage of the new H1 Wireless Chip, the same one that just went into the Apple AirPods. With it, you’ll notice faster pairing times and hands-free Siri. You can certainly survive without those features, obviously, but hands-free Siri is a spectacularly useful feature if you want to place calls or send texts without picking up your phone.

Staying in your ear and connecting to your devices seamlessly is table stakes in this category. What really matters is how good they sound when you’re moving - an area that a lot of popular earbuds don’t really master.

The good news is that the Powerbeats sound good both during a workout and during your time away from the gym. Yes, there’s a slight flimsiness to the sound if you take a critical ear to it - but it’s not the kind of thing you notice during your workout.

Over the course of a few weeks we listened to a number of genres and found that, like you’d expect, the Beats brand still caters to EDM, R&B and rap, and can now play most crunchy rock and alternative with some authority.

What’s more surprising is that the Powerbeats Pro have really turned down the bass this time around. They’re not quite at a flat EQ, but it’s like a gentle v-shape that boosts the highs and lows with a slight recess on the mids. It’s a smooth curve that music sounds reasonably energetic, but not too slanted that movies and shows are unwatchable. In fact, even movies like Thor Raganarok sounded absolutely fine with them.

The problem here, however, is that music - and audio as a whole - is relatively subjective. Our preferences for an EQ curve aren’t going to be your tastes, and Apple doesn’t provide you any tools to alter the sound. That can be frustrating if you don’t feel like you’re hearing enough mids when you’re watching a movie and worse, if you feel like your music is missing some sparkle in the upper register. As of now, there’s no way to add any of that back in.

You’ll also be made frustratingly aware of all these issues when you take the Powerbeats Pro with you on any form of public transit - for all its other features, the Powerbeats Pro still don’t offer noise-cancellation. Even worse, however, is that they don’t block sound out very well either (what we call passive noise-isolation) - so, unless you blast your music at uncomfortable levels, expect to hear everything going on around you.

An even more practical issue people might have with the Powerbeats is that they’re only IPX4 splash-resistant. This means they can take a bit of sweat, maybe an accidental splash from a water bottle or someone jumping in the pool, but they’re not water-proof. That means you need to be careful if you bring these with you to the beach and you should keep them as far away as you can from a pool party - if they stay submerged for more than a few seconds, they probably won’t ever work the same.

Where we found the Powerbeats Pro to perform their best is in a near-quiet environment, like your office, your home or your gym - because you can use hands-free Siri, they’re great for setting timers in between sets and placing calls to friends and clients. And, because they’re so comfortable in the ear and last around eight hours between charges, you can wear them around the house for hours without issue - making them a decent everyday headphone and the one we’d go for if we needed to make a call or listen to Spotify on our phone.

To keep the music going, in between sessions we’d pop the earbuds back into their case and they’d be ready to go and fully charged within an hour and a half.

Ultimately, while the Powerbeats Pro impressed us, they’re simply not the best true wireless earbuds on the market. These earbuds still aren’t noise-cancelling like the AirPods Pro, nor are they water-proof like the Jaybird Run XT, nor do they sound as good as the RHA TrueConnect - our favorite true wireless earbud at the moment.

That said, however, they are - in our opinion - Apple’s best workout earbuds to date thanks to small additions like the earhooks, pressure-reducing micro-laser barometric venting hole, their longer battery life and superior sound quality.

To that end, buy these earbuds if you’re an Apple-loving gym-goer who can appreciate better-sounding music and features like hands-free Hey Siri, and don’t mind paying a bit more for those things.