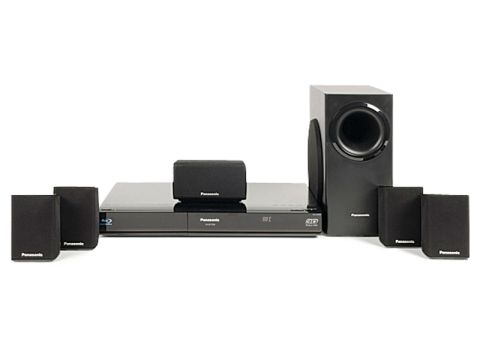 The diminutive speakers have a tendency to rattle at high volume

The art of designing AV kit to look contemporary and even attractive is a skill that seems to have passed Panasonic by – its designers refuse to match the exterior aesthetics or the menu systems of its products to the technological innovation that lies within their often dour exteriors.

The BTT350's main unit, for example, looks almost the same as one of the brand's early DVD players, or dare I say it, a late VCR.

Yet, this innocuous box is capable of serving up eye-popping full HD 3D images, to say nothing of its multimedia talents, including VieraCast internet video, DLNA networking, SD card playback and a built-in iPod/iPhone dock.

It's also a fully-fledged home cinema system, with 5.1 capability out of the box and the potential to deliver 7.1 surround sound by adding extra speakers and an optional wireless kit.

As per the main unit itself, the dinky sound boxes are remarkably unassuming to look at, if solidly built, although the side-firing sub looks as if it were made from MDF offcuts and warrants, like the main unit, being kept out of sight.

Be warned that when you place an iPod in the recessed dock on the top of the unit the overall height goes from 62mm to 150mm, which may be too much of a snug fit for some shelving systems.

The connections are hardly generous, but they do tick most of the AV boxes. Naturally, there's an HDMI v1.4, and this has an audio return channel, through which you can route your TV's sound, while using the single digital optical input for a games console, perhaps.

The BTT350 is a DLNA fiend that's easy to integrate into a home network using wired or wireless LAN connections. The DY-WL10 wi-fi adapter is an invaluable optional extra that simplifies the process of setting up a network and accessing Panasonic's rather limited VieraCast internet video service.

It seems incongruous to find a composite video output on the rear of the unit, but this is the only video conduit that functions with the iPod dock. You can access an iPod's music folders using HDMI or digital optical, but if you really want a laugh try watching a video on a 50-inch plasma using composite video. It's similar to watching TV through a fish tank.

Setting up the system is straightforward, thanks to the colour-coded speaker wires and an easy setup wizard that guides you effortlessly through the various parameters, provided you don't lose interest when navigating the soporifically dull menus.

There's no auto setup microphone; instead you can adjust the level of each channel manually while listening to white noise. Call me Mr Sad, but I think this is actually kinda fun.

There are four 'easy listening' DSP modes: flat; heavy; clear and soft. Setup enables you to choose which input is used for your TV's sound and whether or not to convert all sources to multichannel output. You can also engage Quick Start or Low Power standby, which registers 0.2W on the consumption scale.

The remote control is compact yet nicely laid out using Panasonic's eclectic Start button as the route to all sources and functions. The main annoyance is the absence of an eject button on the handset.

By default, the centre channel has a few more dB up its sleeve than the other satellites, and this allows subtle dialogue to shine through, such as The Thing's mutterings on the Brooklyn Bridge scene in The Fantastic Four's DTS MA-HD soundtrack on Blu-ray.

Yet the subwoofer lacks subtlety and blooms slightly when the going gets tough. It also vibrates uncomfortably with bass-heavy music.

My THX test disc showed that rear effects can be nicely imaged, but as expected from such compact satellites, the upper part of the spectrum is clipped, producing a raspy metallic sound, especially at high volume when the cabinets also rattle.

So long as you don't drive it too hard, though, the BTT350 will reward you with decent, involving audio, infinitely superior to any flatscreen's built-in speakers.

Picture wise, the system is no slouch either. On both 42-inch Panasonic and 50-inch Samsung 3D plasmas it conjured up a highly-polished and engrossing Monsters vs Aliens 3D experience.

But in fact it's with 2D that the player's prowess is best observed. With Avatar and The Fantastic Four detail levels don't quite match some of the elite decks out there, but overall images are, vibrant and capable of subtle gradations even in low light.

There's a lot about the BTT350 that won't make a home cinema enthusiast get overexcited. But it is a well built and solid performer that's very reasonably priced, so could be an ideal first step on the ladder for an AV novice.