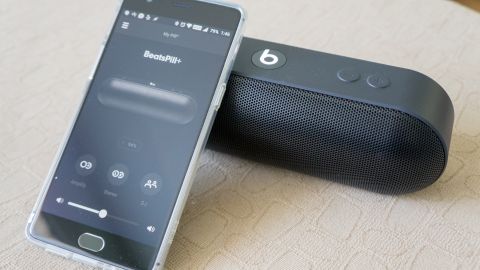 The Beats Pill+ far improves upon the original, but this iteration's mediocre sound and steep price mean that there are still some improvements that need to be made.

Let's get this out of the way; the original Beats Pill wasn't my favorite Bluetooth speaker – it was bass-heavy and uncontrolled. I didn't like its bigger Pill XL sibling, either, as I'm not a huge fan potential fire risks.

But both those products came out before Apple purchased Beats headphones for $3 billion (about £1.79b, AU$3.25b). Apple's had a far better track record when it's come to audio products – I mean, these are the people that made the iPod.

So, have Beats products prospered under Apple's tutelage? In the case of the Beats Pill+, the answer is yes.

The Beats Pill+ improves on the original Beats Pill in just about every way, including sound quality. However, in the time that it's taken Beats to catch up, the market for $200 portable Bluetooth speakers has become insanely crowded – and, unlike the iPod before it, the Beats Pill+ just isn't good enough to stand out from the crowd.

Likewise, while it isn't waterproof like the UE Boom 2 and JBL Charge 3, the Pill+ is built like a tank with a metal and rubber chassis. The rubber flap protecting the USB, aux and Lightning ports means the Pill+ has some splash resistance, but you probably shouldn't bring it poolside with you.

On top of the speaker, you'll find rubber-coated buttons that control power, pairing and volume. The buttons provide a good tactile feel and their rubber coating will withstand abuse, though the exposed and illuminated Beats button may get scratched over time. There's also an included carrying bag that offers some protection when taking the speaker with you on the go.

Inside the chassis, the Pill+ features two tweeters and two woofers to help disperse sound through its mesh metal grill.

While the design felt like a small iteration, performance-wise, the Beats Pill+ offers a massive improvement in sound quality over the original Pill – it's clearer and suffers from less distortion than it has in the past. Apple hasn't messed with the Beats "V-shaped" signature sound, though: there's still a lot of bass, a ton of highs and slightly muted mids.

Like the original, I thought the Pill+ laid the bass impact is strong, but it frequently sounds muddy and uncontrolled. Highs are energetic, but too much so at times. To that end, high frequencies from cymbals and violins can be a bit piercing, especially at high volumes.

Speaking of high volumes, the Beats Pill+ gets really loud. It had no problem filling my garage with sound and can be heard above the noise while I wrenched on my car.

That said, while it can get quite loud, sound quality suffers at high volumes. The distortion is "crunchy" and fatiguing so I don't recommend maxing out the volume if you can help it. (Those looking for a louder-than-comfortable Bluetooth speaker should check out the Sound Blaster Roar 2.)

Likewise, battery life for the Beats Pill+ is good, but definitely not what I'd consider class-leading. You'll be able to squeeze out 12 hours of music playback and can even use the Pill+ to charge your phone in a pinch.

There's a handy battery level gauge next to the power button so you're not left guessing how much power you have left, and once your speaker goes down for the count, the Pill+ charges from dead to full in about 3 hours using the included charger and Lightning cable.

If you feel compelled to rock out to two Bluetooth speakers, Beats does let you pair up two Pills+ speakers for stereo playback or to amplify sound, however you'll need to download the Beats Pill+ app for Android or iOS in order to take advantage of the feature. Besides dual playback, the app also lets you and a friend "DJ" together by controlling a playlist and playback from two separate devices.

So who is the Beats Pill+ good for? Anyone looking to put style over substance. With myriad other better-performing bluetooth speakers out there, the big draws here are a solid build quality and bass-heavy approach to playback.

First off, it can't be overstated how much better the Beats Pill+ is over the original speaker. Not only is its build quality excellent, but sound quality is good, too … as long as you don't mind Beat's signature bass emphasis. The speaker doubles as a battery pack and speakerphone as well, which are nice additional features.

That said, it's hard to justify spending $230 (£190, AU$360) on the Beats Pill+ when there are at a least a half-dozen better speakers available for much less money. It's not waterproof or include NFC. It can't pair with multiple devices and its battery life is merely average. However, the biggest knock against the Beats Pill+ is its sound, which might be good for playing back rap, electronic and pop music, but falls flat with every other genre.

Compared to the competition, the Beats Pill+ is just too expensive and middle-of-a-crowded-road to recommend.

I found the JBL Charge 3 beat the Beats Pill+ in every performance category – the Charge 3 lasts 8 hours longer, is waterproof and offers rich, balanced sound for $80 (about £60, AU$106) less. The UE Boom 2 is also slightly less expensive than the Pill+ and features waterproofing, a 15 hour battery life and pairs with up to 8 devices.

The speaker is average at best but comes with a premium sticker price. For much less money, you can get better sound and more features from speakers like the JBL Charge 3 and UE Boom 2. If you're upgrading from the original Beats Pill and are committed to sticking to the brand, however, the Pill+ will be a major upgrade to your audio arsenal.