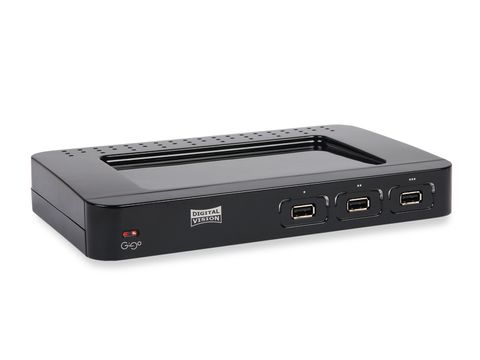 With no internal hard drive, the Gigo is a dinky little box

The GiGo is straightforward to use and works well. However, unless instant takeaway recording is a must, you may prefer the superior functionality offered by a conventional Freeview PVR (some of which can be picked up for just a few tenners more) with archiving ability. Or you could wait for Digital Vision's forthcoming twin-tuner Freeview PVR, which is set to offer both hard disc and via-USB recording options

The DIgital Vision GiGo is billed as a 'VCR replacement' for tapeheads who've yet to ditch their analogue VCR in favour of a Freeview tuner-equipped DVD recorder or PVR and might prefer the GiGo as a cheaper route to digital TV recording. And at £70 it is, though you still need to buy one or more USB sticks or an external hard drive to get the benefit.

About the same size as the average Freeview adapter, the GiGo has a functional, almost prototype-like plastic casing with nothing on the fascia save for the maker's logo, a row of LED indicators and three USB ports that glow red around the edges when you're recording/copying or green when you're playing something back.

On the rear sit two Scart outputs with the VCR Scart capable of feeding the picture to a VCR or DVD recorder. There are no dedicated audio outputs.

The remote is rather chunky and falls into the trap of having too many similarly sized buttons, although they are at least arranged in a fairly logical way. Included are buttons for switching between each of the USB ports.

The menu system is easy to fathom but there are help pages which don't extend to offering guidance on recording or copying (otherwise covered in the manual).

You can create up to 10 favourites lists and there's an eight-day EPG displayed in grid format with the current channel running in the top left corner, next to a synopsis.

The triple USB port arrangement suggests more recording flexibility than is actually available. There's only one digital tuner so you're restricted to recording one channel at a time, not while watching another (though you can be watching a recording). You can also copy between two sticks/drives while watching a live channel, recording or playing back a recording.

Recordings are scheduled via the EPG or using a 32-event manual timer with daily, weekly, Monday-Friday or Monday-Saturday repeat options. There's no series link feature, but the GiGo can record while in standby.

Completed and current recordings (which can be watched while still in progress) are accessed via a Library where they're labelled with name, date, time and duration, can be renamed and the list sorted by genre. Unless you're recording what you're watching, timeshifting is not supported, although we're told this may be added via a software update.

Recordings are made in the original MPEG-2 format so one hour equates to around 1.7GB of drive space (target drives must be FAT32 formatted). There are no quality settings to choose from.

HDMI would have been nice, but the TV Scart does have an RGB option ensuring picture quality equivalent to the average Freeview adapter. The same is true of recordings, while fast-forwarding and rewinding remains a glitch-free experience.