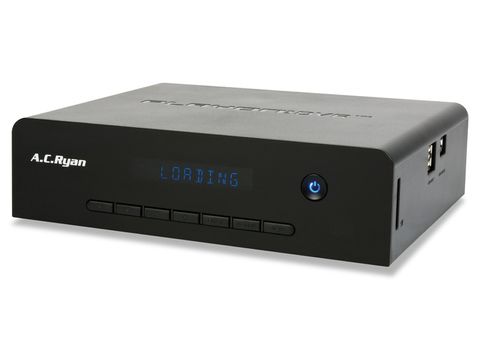 It's fairly nondescript to look at (like an off -the-shelf media centre PC, which in some ways is what it is), but it runs quietly and its black casing should be a match for most people's living rooms. A large blue LED readout sits atop a row of operating buttons on the fascia.

It's sold with a choice of internal 3.5-inch SATA hard discs – either 500GB, 1TB, 1.5 and 2TB, or can take drives attached by eSATA or USB (there are two ports on the right and one on the rear). Alternatively, you can stream from networked drives (DLNA/uPnP and Samba are supported), though wireless functionality requires adding a dongle.

Other connections (for which a generous amount of cabling is provided) on the rear include HDMI, component, optical and coaxial S/PDIFs, a multi-format memory card slot and composite and phono inputs for external capture.

The remote is cheap but effectively signposts most key features, though it's strange that there's no dedicated button for 'jumping' to TV and easy to get the start and end buttons confused with fast-forward and rewind.

The interface is shortly to be overhauled but it's currently serviceable with a side-scrolling Home menu providing access to the main options. The TV portion includes a seven-day-ready EPG where you can view a list of what's on or coming on the current channel day by day, with the live channel inset on the right and synopses displayed at the bottom. Oddly, you can't browse what's on other channels without the box needing to change over to them.

The same goes for the now-and-next programme information bar. Recordings can be scheduled from the EPG by using a manual timer with repeat options, or by pressing record when watching a channel where you're given the option to set the duration in 30-minute increments.

You can also schedule them online using a web interface. This isn't Freeview+ certifed, so there's no series link recording. Up to two channels can be recorded at once (including while playing media or recordings) and you can timeshift (constantly if required).

Recordings (and video files in general) can be fast-forwarded or rewound at up to 32x normal speed, slowed down up to 1/16x or you can 'goto' a desired time. You can record (in .ts format only) to USB, eSATA or internal drives (files can be copied between storage including via FTP) and recordings are automatically labelled with broadcast info and placed in sub-folders in a REC folder, where they can be viewed while still in progress.

There are five recording quality levels. HQ and SP are perfectly acceptable virtual facsimiles of the native broadcast but results get progressively smeary from then on.

The Windows-style Browser option is the quickest way to access files either networked or physically attached with media divided into Music, Movies and Photos.

The player handled all the file formats we threw at it with nary a glitch and you can view photo slideshows and import playlists.

Now obligatory 'apps' comprise no-frills Picasa and Flickr photo browsing/searching, plus Weather and RSS news feeds (you can add your own). YouTube and BBC iPlayer (predictably) are notable absences. It can also act as a BitTorrent client.