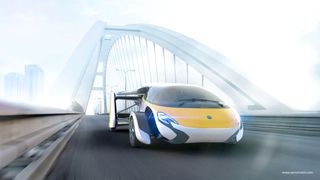 If you were to ask any sci-fi writer of yesteryear what the future was going to look like, flying cars would undoubtedly rank pretty high in the list of must-have accessories. Now it looks like that fantasy is finally within touching distance of becoming a reality.

Flying car company Aeromobil has announced its first road legal flying car. At the Monaco luxury product event Top Marques the company unveiled its fourth generation of flying car, the first that will be commercially available.

According to TechCrunch, pre-orders are due to open imminently, with delivery of the vehicle expected in 2020. You’re going to need pretty deep pockets to be one of the lucky few getting your hands on the first limited run though – the price starts at $1.3 million (about £1M UK, $1.7M AU) – and you'll need to have both a driver’s license and a pilot's license drive/fly it.

There is, however, a plan to create a fully automated version in the future, which could take away the pressure of all those flying lessons.

The Aeromobil vehicle isn’t actually the first commercially available flying car to hit the market. It was just pipped to the post by the PAL-V, which comes in at a relatively modest £425,000, according to The Independent.

The PAL-V is effectively a car/helicopter, however, whereas the Aeromobil converts from a car into a plane. The process takes about three minutes, and once converted, the vehicle can fly at speeds of around 224mph, and can fly for 446 miles at 75% of its maximum speed.

The engine that powers the propeller sits behind the driver's seat, and when on the ground it acts as a generator for two electric motors that power the front wheels. Which technically makes it a hybrid.

If you want an idea of what it'll look like in action, check out the promo video for the previous model, the Aeromobil 3.0 below.