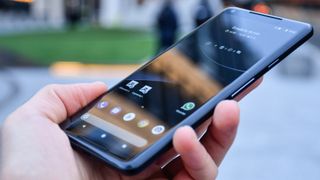 It's not been the best of launches for Google and the Pixel 2 XL, with widespread reports of screen burn-in issues on new devices and users complaining about muted colors, both problems that Google is investigating. Now there's a new bug to add to the list: unresponsive spots near the edge of the screen.

As per a Pixel User Community post, some Pixel 2 XL owners have been noticing dead spots close to the bezels, specifically on the right-hand edge of the screen. There's also a video of the problem doing the rounds.

Judging by the fact that an official Google Community Manager has responded to say a fix is in the works, this sounds like a genuine issue that Google is acknowledging. Apparently it's going to be "addressed in a future OTA [over-the-air] update", though we're not sure exactly when that will be.

Getting close to 99 problems

This is only a few days after audio problems were reported with the some units, where a high-pitched and tinny sound could be heard while recording video. It's not clear how many phones are affected, but again, Google has acknowledged the problem, and says a fix is rolling out in the next few weeks.

At this stage we'd class these as minor bugs - especially as Google seems on top of fixing most of them - and we're still recommending the Pixel 2 XL as one of the very best phones of the year if you're in the market for a new handset.

The iPhone X hasn't been without its problems either, but neither Google nor Apple will want the list of annoying bugs and glitches to get any longer, even if the number of people affected is relatively small in the grand scheme of millions of phones shipped.