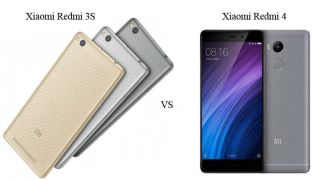 Xiaomi unveiled the Redmi 4, Redmi 4A and the Redmi 4 Prime in China not too long ago. As you would know, this is considered to be succeeding the Redmi 3S lineup which was launched by the company in June. So what’s exactly different between the two phones? Let’s have a look.

There are some changes here, especially with regards to the fingerprint scanner. While the Redmi 4 introduces this to the lineup, the Redmi 3S didn’t have this at all. The Redmi 4 also has a slightly different camera placement compared to the Redmi 3S, so the customers will be able to easily tell the two apart.

Both handsets are packing a 5-inch HD (1280x720) display, so there’s practically nothing to tell them apart in this area. But the new design will help customers differentiate between the two devices.

This is another area where there’s barely anything to tell the two phones apart. Xiaomi is using the same octa-core Snapdragon 430 processor with a clock-speed of 1.4 GHz.

Nothing’s different here either with the Redmi 3S and the Redmi 4 packing 4,100mAh batteries. Keeping this in mind, we expect the standby and usage times to be practically the same.

It’s funny how the two devices are practically identical in terms of internal hardware. Both the Redmi 3S and the Redmi 4 come with 16GB of onboard storage (expandable via microSD) and 2GB of RAM. Perhaps one of the biggest changes here is the addition of the fingerprint scanner on the Redmi 4. The Redmi 3S Prime comes with a fingerprint scanner, however. Android 6.0 Marshmallow with MIUI 8 is available by default on both devices.

The Redmi 3S is priced at Rs 6,999, and while we don’t have the Indian pricing or availability for the Redmi 4, the pricing should be pretty much the same. Since the hardware is practically identical, there’s no reason for Xiaomi to bump up the pricing.