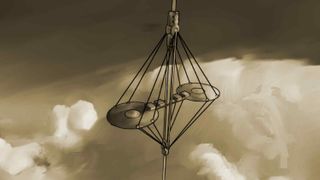 Bad news for sci-fi enthusiasts. Chinese nanotechnologists have calculated that the carbon nanotubes are nowhere near strong enough to build a space elevator out of.

In case you're unfamiliar with carbon nanotubes, they're a "wonder material" made up of carbon atoms arranged into hexagons that make up a tube.

They have weird and exciting electronic, magnetic and mechanical properties - including a tensile strength 100 times greater than steel with only one-sixth the weight.

That has lead some to suggest they could be woven into a fibre that would be strong enough to stretch into space, creating a 'space elevator' that could quickly and cheaply ferry goods and people into orbit.

Unfortunately, the carbon nanotube fibres that we've made so far are about a hundredth as strong as they should be. To find out why, Feng Ding from Hong Kong Polytechnic University lead a team that simulated what's happening at the nanoscale.

They built a model of a carbon nanotube with just one atom out of place - turning two of the hexagons into a pentagon and a heptagon. In tests, this tiny fault acted as a weak point, snapping much more easily than the adjacent hexagons.

Once it broke, the resulting strain on the rest of the structure was enough to totally unravel it.

Ding added: "Unless great breakthroughs on carbon nanotube synthesis can be achieved, using carbon nanotubes to build a space elevator would be extremely challenging."

He's right. A working space elevator would require 22 miles of carbon nanotube fibre without a single atom in the wrong place.

In space, where radiation and solar winds become a factor, that's pretty much an impossibility. Ah well - for the time being it looks like we'll have to stick with SpaceX's reusable rockets for getting things into space instead.