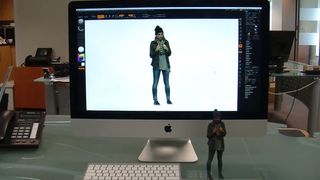 Will 3D printing be huge this year?

Technology never stops moving, and 2014 is set to be no different. We've picked 10 industry areas that are sure to see innovation the likes of which just might revolutionise the way we live and work in the years ahead.

Read on to learn more about everything from online supercomputers to new compression technologies and the possible dawning of a new industrial age...

1. Tablets will get bigger

The iPad mini was just a phase. The 12-inch Samsung Galaxy Note has already had its details leaked and could make an appearance at CES 2014 or soon after. Meanwhile January also marks the appearance of the unique A3-sized Panasonic Toughpad 4K UT-MB5, a 20-inch tablet with a 4K resolution aimed at architects, photographers, and – laughably – sales people.

Tablets will also get bigger in reputation as they spread beyond our homes and offices to … everywhere. "We can expect to see tablets infiltrating many public spaces such as cafes, airports, buses and taxis," says Kevin Curran, senior member at the Institute of Electrical and Electronics Engineers (IEEE) and Reader in Computer Science at the University of Ulster. "They require little maintenance and thus are suited to public spaces … it will be much more common to order food and drink from tablets in 2014." It's about time, too. They've been doing that in Japan for yonks.

2. Ultra HD 4K will spread to TV and phones

Both the 2014 FIFA World Cup in Brazil and Sochi Winter Olympics will be filmed in 4K, and by the end of 2014 both Netflix and Sony's Video Unlimited services will be stuffed with 4K content. Meanwhile, the South Korean government has mandated a 4K rollout in 2014 (there are already five channels of Ultra HD content being broadcast in South Korea as part of a trial).

"Unlike 3D, 4K has the legs to become an industry norm," says Sam Rosen, Practice Director at analysts ABI Research, "but it will take time for the necessary infrastructure, installed base of devices, and content to come together."

Towards the end of 2014, expect to see a plethora of 3,840 x 2,160 pixel resolution mobile devices from the usual brands, all armed with a Qualcomm Snapdragon 800 processor (the only one so far that's capable of dealing in 4K video). This will likely usher-in the 4K revolution on mobiles with both 4k video support and 4k-capable cameras.

Worldwide shipments of 3D printers are expected to grow by 75% in 2014, followed by a near doubling of unit shipments in 2015. "The consumer market hype has made organisations aware of the fact that 3D printing is a real, viable and cost-effective means to reduce costs through improved designs and streamlined prototyping," says Curran. "We can expect to see more virtual world merging such as 3D-printing software, which is letting fans of the construction computer game Minecraft bring their creations into the real world."

2014 should see the re-entry of Hewlett Packard into the 3D printing industry, which is a big deal for making it a mainstream movement, though it will also cement itself as a game-changing industrial process. The aviation and space industries are gearing up to use 3D printing technology to produce lightweight components for jet engines, satellites and more. CAD can be used to insert gaps and vents into ever more complex one-piece objects, while the lack of waste materials means that, for example, the pricier, lighter, but stronger titanium can be used instead of aluminium.

4. Internet of Things gets its own space

The internet is expanding beyond computers and smartphones. Not only are more gadgets getting Wi-Fi, Bluetooth or data connectivity (think wearable fitness devices, Google Glass and smart home devices like the Nest thermostat), but platforms are beginning to appear that will integrate them together.

However, the so-called Internet of Things needs its own space. "Ofcom is currently investigating the possibility of using the old analogue TV channels, known as 'white space', to trial a new 'weightless standard' which could allow small, low-power connected devices to talk to each other," says John-Paul Rooney, partner and patent attorney at Withers & Rogers.