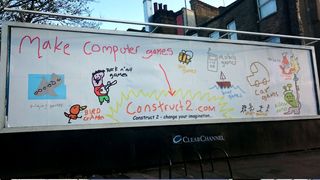 MS Paint is far, far, faaaar from the standard for graphic design, but that didn't stop this massive billboard from being made using only Microsoft's super-simple image editing software.

The signage features several crude doodles for the viewing pleasure of commuters in south-east London, complete with stick figures and the death knell of any self-respecting graphic designer: Comic Sans. Spanning a considerable 36-square meters' worth of surface area, the billboard may just wind up being the world's largest piece of artwork made with the rudimentary software.

Construct 2 is the product being advertised: it's a game development software that lets users quickly build 2D games without needing a heavy background in coding. Construct 2 was created by London software company Scirra, which, believe it or not, is quite proud of its advertisement.

Scirra Co-Founder Tom Gullen revealed in an interview with Ars Technica that he designed the billboard, taking no more than 20 minutes to make the image. "I was pretty happy with the result," Gullen admitted. "I'm a web developer by trade so this sort of advertising is all new to me."

Creating the simplified artwork with MS Paint was not a decision brought on by laziness, however. Gullen explained that he believes fledgling developers become disheartened if they have too lofty a vision for their first game. "This advertisement is meant to say to them: your first efforts might not be AAA standard," he said. "Everyone has to start somewhere!"

According to Gullen, the billboard is paid for until tomorrow, so anyone in the South Bermondsey area of London, keep an eye out for this low-tech masterpiece.