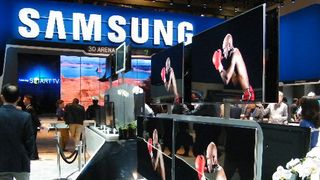 Forget smartphones - Samsung has other treats in store for CES 2013

Your next smartphone may be able to bend to your will - literally - thanks to flexible screen technology Samsung Display plans to show off at the Consumer Electronics Show next month.

CNET reported that the display division of Samsung Electronics will show off a pair of bendable screens which could one day reinvent how smartphones, tablets and even HDTVs are made.

Samsung Display will also use the same event in Las Vegas to unveil the technology applied to a 55-inch television set.

The impressive technology used for the screen is currently missing a touch panel and cover lens, which are considered necessary to form a modern touchscreen-enabled device.

While demonstration prototypes will indeed bend without breaking, Samsung Display was quick to note that the screens aren't yet made to curl up into a roll.

In addition to flexible screens, Samsung is rumored to announce its next Galaxy S4 smartphone at CES 2013, along with a QWERTY-based tablet.

There are also rumblings that Samsung could debut a completely new image for its iconic brand next month, with a focus on lifestyle activities more befitting its new "global powerhouse" status.