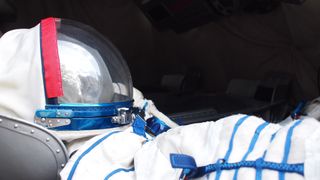 Fly me to the moon, then print me some tools

Future moon missions could blast off with 3D printers, ready to print small tools out of lunar bits.

This has to be the most ridiculously futuristic story we've ever written, as the scientists even melt the rocks using lasers.

Researchers in the US successfully melted down simulated moon rocks (also known as lunar regolith simulant, if you want to get technical) and used them to 3D print small objects.

The findings mean that lunar missions could take fewer physical objects with them – instead of a host of tools, all the astronauts would need is a 3D printer and the necessary digital files.

Although some scientists have expressed concern that a space mission isn't going to lend itself to the levels of accuracy required, the lead author of the study remains optimistic.

"As long as you can have additive manufacturing set up, you may be able to scoop up and print whatever you want. It's not that far-fetched."

Additive manufacturing is what is usually meant when we talk about 3D printing, whereby an object is built up layer-by-layer.

There aren't any moon landings in the works, however, although even the UK is having a think about giving it a go after making a £16 million investment in the European Space Agency's Project Orion.