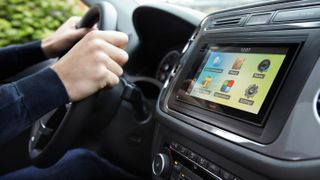 Android dash systems are likely to dominate the 'conected car'

From Froyo and Gingerbread to Ice Cream Sandwich and the latest Jelly Bean, Google's Linux-based Android operating system is most often thought of as smartphone and tablet-fodder.

Completely open source and free from licensing royalties and proprietary software, app developers and product designers from all genres have been quick to embrace Android - and it's a trend that's continuing.

It might come under pressure from rival operating systems in the near future, but for now Android is a mobile operating system that's surprisingly flexible - as proved by its use here in anything from cars and fridges to games consoles and the next generation of wearable smart watches and smart glass headsets.

If you're the type of person who likes to note down your shopping list throughout the week using the Evernote app on your smartphone, you truly are the most organised person in Britain. Well done you. Your prize is the upcoming Samsung T9000 (£2,400) four-door fridge.

Equipped with Evernote as a native app within an Android OS (exact version TBC), the T9000's 10-inch touchscreen can also host photos and video apps, calendar schedules and recipes, though downloading apps straight from Google Play gets the cold shoulder.

Will the T9000 sport the latest Android OS or a mod of an ageing version? We know not, but Ice Cream Sandwich, at least, would be, err, cool.

If your smartphone and tablet runs Android, a TV that uses the same system is a no-brainer, but such a thing is relatively rare. You could investigate something like LG's Google TVs, but for a pure Android add-on, the Archos TV Connect (£99) is a simple entry-level retrofit idea.

A clip-on device for a TV that pairs over Bluetooth with a joystick-style QWERTY keyboard-cum-gamepad, the TV Connect is fully certified by Google and enables the downloading of any Google Play app within a completely open Android experience akin to that on any smartphone or tablet.

It's largely about getting smartphone games onto a TV, though the accelerometer-equipped gamepad it ships with uses slightly odd analogue joysticks in place of a touchscreen. How quaint.

As well as toting Bluetooth hands-free calling, voice-controlled track select from an iPhone and an FM radio with web access, it can take a plethora of maps and apps in its Android OS, though an add-on USB wireless 3G dongle is needed to get online.

It's an interesting take on how the connected car future translates to a cheap retrofit device since we expect both built-in on-board communications units, smartphone-linked devices and standalone gadgets like this to have a place.

Other Android-based in-car systems include Ca-fi and Renault's R-Link. The latter is an Android mod that swerves Google Play to offer only a handful of paid apps - though Renault promise to pay the 3G bill forever.

Either way, some think Google - probably via Android - will dominate the connected car landscape for years to come.

It was only a matter of time before someone made photo sharing and back-up possible from a proper camera, and it's no surprise that the Samsung Galaxy Camera (£335), a semi-serious compact, sports Android 4.1.

This compact boasts an enormous 4.8-inch touchscreen on its back that hosts any Google Play app, but adds a 21x optical zoom lens with 23mm aperture, a 16.3-megapixel sensor, and GPS location-tagged uploads to Facebook and Twitter.

Expect to see other attempts in super-zoom and D-SLR cameras in the near future; for now, the only challenger is Nikon's Coolpix S800c (£380), which also runs Android and was actually first to the prize.