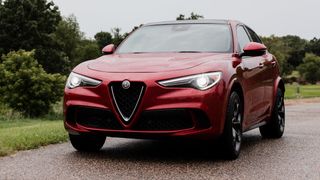 In the future, cars won’t be so annoying about safety issues. If you've driven recent models, you'll know there are little warning flags that pop up about lane markings, traffic delays, and of course the dreaded speed alert. In some BMW models, the HUD will flash a little icon when you speed as a way to inform you about being an idiot. It even has a red flashing icon as though the car wants to give you a hint of what red flashing lights look like.

In a recent test of the 2019 Alfa Romeo Stelvio Quadrifoglio, one safety feature worked a bit differently. It’s almost subversive – in a good way. In the menus, there’s a way to set a speed limit for the car, from 20mph up to something much more insane. I set the limit at 65mph, which is the posted speed in my area for many highways. (Note for those interested in this twin-turbo monster crossover: the speedometer actually goes all the way to 200mph.)

Now, Ford has offered speed limiting in their cars and trucks for years as part of the MyKey feature set. Designed in theory for teenagers, the idea is to set fairly strict guidelines for inexperienced drivers, such as disabling the radio unless you buckle up. I recall testing a speed limiting feature in a Ford truck once, and you simply can’t go any faster – the accelerator pushes back. My only issue is that MyKey is part of a suite of features for teens (mostly) and some of the menus and options can be a bit confusing... for the parents.

On the Stelvio, the speed limiter is just one setting. Once enabled, you set the speed limit and that’s it. There aren’t any other related features to worry about.

I liked that during multiple road trips, mostly because it works so well and also because the Stelvio wants to go fast. On one trip, I forgot all about the setting and start punching it a little. I didn’t see the nanny-minder slap on the wrist warning. The Stelvio just refused to go faster.

The speed of progress

That’s important as we enter an age of connected cars and automated driving. I prefer when the car thinks for me in situations where that is actually helpful and not annoying, such as limiting my speed if I’ve chosen to allow that. The difference here is critical. For starters, a warning doesn’t work. Our brains tune that out and we ignore it, at least until we realize the real flashing lights of a police car and a siren start whirring away behind us.

More importantly, though, is how distracted we can be when we drive. It’s all about the brain science – as humans, we tend to go into automatic mode when we drive. That’s awesome because we don’t have to think about the brake pedal anymore, we just use it by rote. One specific part of your brain controls those motor functions. It’s not as helpful though when we need to control our speed, not sway out of our lane, or there’s a stopped car on the road.

Some of the future-looking safety features like the speed limiter on the Stelvio are designed to act only when they are supposed to and won’t flash any icons in your face at all. As automakers develop more and more safety features, to an almost overwhelming extent, we’ll appreciate the ones that stay in the background and only do what they are designed to do.