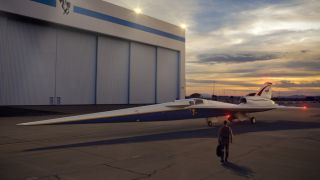 It may dramatically reduce travel time, but supersonic air travel barely exists. However, there's now a new race to produce the first ‘Concorde' for the 21st century, thanks to new tech that's allowing aircraft engineers to overcome the one thing that has so far rendered supersonic air travel unworkable: the sonic boom.

Cue NASA, and its attempts to revive the ground-breaking series of experimental X-planes that stretch back to the Bell X-1 in which Chuck Yeager became the first man to break the sound barrier in 1947.

We’re still flying at the same speeds first achieved in the 1960s because supersonic air travel never became affordable, right? That's partly true, but another huge problem with the luxury airliner Concorde was its very loud sonic boom – around 130 decibels – which could be heard by anyone underneath it while it was traveling at supersonic speeds.

A sonic boom is a shockwave. When something travels faster than speed of sound – 717mph – shockwaves form around the nose, propagate away from the aircraft, and are heard on the ground as a sonic boom. In the case of Concorde it was actually a double sonic boom, and it's why Concorde wasn't allowed, by law, to fly at supersonic speeds over land; it mostly flew across the Atlantic Ocean between London/Paris and New York, and never across Europe, Asia, North America or any other landmass.

“The return of supersonic passenger flight has been a background operation since the grounding of the Concorde,“ says aerospace expert Paul Kostek, senior systems engineer at Base2 Solutions and a senior member of the Institute of Electrical and Electronics Engineers (IEEE). In fact, NASA recently struck an agreement with the French national aerospace research center ONERA to collaborate on research predicting where sonic booms will be heard as supersonic aircraft fly overhead.

“This partnership shows there is interest in supersonic travel all over the world,” says Jaiwon Shin, NASA’s associate administrator for aeronautics. “Solving the issue of annoying sonic booms could ultimately cut travel time to worldwide destinations in half.” The aim of the research is to predict exactly where sonic booms will reach the ground.

The $247.5 million X-59 Quiet Supersonic Technology (QueSST) experimental aircraft being developed for NASA by Lockheed Martin’s Skunk Works facility – creators of the legendary SR-71 Blackbird reconnaissance aircraft that flew at Mach 3 for the US Air Force – will cruise at 55,000 feet at a speed of around 940mph and create “a sound about as loud as a car door closing“ in place of a regular sonic boom, according to NASA.

“NASA and Lockheed Martin are beginning wind tunnel testing of the QueSST design,“ says Kostek. Expected to fly in 2021, the QueSST design will fly as the Low Boom Flight Demonstration (LBFD), with the objective of eliminating the sonic boom. “This will be accomplished by gradually increasing the pressure around the airframe and decreasing the shockwaves as the aircraft passes through supersonic speed,” says Kostek.

So how and why is this happening now? That’s down to new materials technologies. “The advent of composites has improved the ability to build this new generation of supersonic aircraft,“ says Kostek. “Shapes – body, nose, wings – that were not possible with titanium can now be done using composite technologies.“ NASA says the plane's distinctive shape – specifically its long nose and highly swept wings – will turn sonic booms into 'sonic thumps'.

From 2022, NASA will perform flight tests in a bid to prove that the quiet supersonic technology works as designed, and from 2023 until 2025 it will fly the X-59 QueSST over several US cities at supersonic speeds. It will then survey the folks living beneath the flight paths, and see if/how much the flights annoyed them. The data they collect will be passed to US and international regulators considering new sound-based rules around supersonic flight over land.

That's crucial, because all supersonic travel over land is currently banned. As well as trying to solve the tech problems, NASA needs to make the case for updating international law.

It's not just NASA that's working on boomless supersonic aircraft. Another such plane is Baby Boom, Boom Technology's XB-1 Supersonic Demonstrator, which is now being built in Colorado. A 55-seat commercial supersonic aircraft, it could make the trip from London to New York in just three hours at speeds of Mach 2.2, or 1,451mph – that's faster than Concorde.

“Boom is working on an experimental testbed aircraft, which will be used for proof of concept, and elimination and limiting of the sonic boom,“ says Kostek. Japan Airlines and the Virgin Group are early investors, the former having pre-ordered 20 Baby Boom aircraft.

Boeing is another plane-builder with designs on breaking the speed of sound. “Boeing has also announced a design concept is in work for a Hypersonic (Mach 5) aircraft,“ says Kostek. Mach 5 is a whopping 3,836mph, and Boeing claims a hypersonic passenger vehicle like this could reach almost anywhere in the world within one to three hours.

How it beats the boom is a bit of a cheat. “The plan is for the aircraft to fly higher, to 95,000 feet as opposed to current operations at 45,000 feet,“ says Kostek. If it ever gets airborne it won't be for a least another 20 years.

“We're excited about the potential of hypersonic technology to connect the world faster than ever before,“ said Kevin Bowcutt, senior technical fellow and chief scientist of hypersonics at Boeing. “Boeing is building upon a foundation of six decades of work designing, developing and flying experimental hypersonic vehicles, which makes us the right company to lead the effort in bringing this technology to market in the future.“

Although it's definitely coming in some form – Virgin Galactic's space tourism plane recently reached Mach 1.9, after all – for the foreseeable future supersonic travel is likely to be limited to specialist flights, luxury business travel, and national security, and not mass commercial services. The technology gap may be filled by NASA, and the sonic boom eradicated, but there is still the small matter of airfares – after all, the vast aviation business is built on low fares.

“Financial issues will drive if these aircraft ever become successful in the marketplace,“ says Kostek. “How much will passengers be willing to pay to for faster travel?”