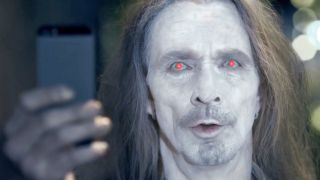 I've gone back through the archives a little bit this week, checking out a running watch that's now gone down to a decent price and re-trying an app that uses the undead to make you run faster.

Just so we're clear: even though I knew it wasn't real, there's nothing more creepy than being out in the countryside in the dark and hearing zombies creeping into your headphones. NOTHING.

I first tested the TomTom running watch a few years ago, when it was just the basic Runner. It was filled with irritations: a battery life that simply couldn't last for most runs (although that was improved over time) and a 'quick fixing GPS' that had to be connected to the computer every day or two to work.

So when I saw that TomTom had fixed a load of those problems and bolted a heart rate monitor onto the back, I was intrigued.

It's not a new device – in fact, my esteemed colleague Hugh Langley strapped one onto his well-defined wrists last year to try the TomTom Multi-Sport Cardio (which adds in swimming and cycling tracking for triathletes but is otherwise identical) and found it good, but the price 'ran a little hot'.

Well, it's now dropped nicely to just £190 / $235 / around AU$305, which means it's entering a more palatable territory for someone thinking of entering the running watch world and not wanting to skimp on features.

The TomTom Cardio Runner does indeed have a lot of functionality: the GPS tracking allows you to train to pre-defined intervals, distance, calorie count, or even race against a previous activity.

You can train to either pace or heart rate, and set the intervals to either time or distance. These are easy to change and help with the simplicity of the watch

In fact, the only thing that I really missed was being able to set a virtual partner, with the pre-defined race paces not being editable. You can do some tweakery around this, setting dedicated lap pacing, but it's not ideal and a bit unpolished.

That's how I'd describe most of my experience with the TomTom – raw but functional. The interface when running is easy enough to read, but the explanations of what each screen is at the bottom is miniscule. It's cool being able to see a graphical representation of how far behind / ahead you are when racing a course you've done before, but it's not always easy to make out what's being shown.

Even the four way clickable button on the bottom – really nice to use when holding the watch unstrapped, a lot harder when running – exudes the same quality. It works, but you have to get around some slight difficulties.

At least the GPS and heart rate locks are quick at the start – as long as you've connected the TomTom Cardio to a phone or the computer recently. Otherwise the QuickGPS – the system when the watch somehow preloads location data – just won't work, and you'll be left waiting for a while.

Why it can't just use the phone when it's nearby and connected – as most will be when out running and wanting some tunes to strut to – is beyond me.

The TomTom MySports app is basic, but does the job (are you sensing the theme here?), allowing you to see what you've done as a big graph, but no way to interrogate it. You can't scroll through and choose to view certain segments etc, and it doesn't really add enough for me.

The app is as much a part of the running watch experience and elements like auto-uploading to Strava should be possible from within the app, rather than having to mess around with the PC client.

In fact, the watch still relies far too much on being connected to a computer to update, where it could do the same so easily through the app like others on the market.

However, overall I'd still recommend the Cardio Runner, as the heart rate monitor is nicely accurate and adds a good dimension to your training. It's a touch pricey still for what you get and the battery life is only good for around a week even with minimal runs, but it's acceptable.

While you'll need to dedicate some time to getting used to all the functions, once you've got your head around it the Cardio Runner will reward you – it's just not the best on the market.

After last week's column got me thinking about the fusion of technology and real time tracking to make you run faster, I was reminded of this app and decided to give it another go.

For those that don't know Zombies, Run! is designed to be an immersive game, created on Kickstarter around three years ago, that gets you to run faster simply through fear of being chased by zombies.

The messages fade in and out over music playlists you've made (it's best not to listen to podcasts at the same time as you'll miss bits) to give a more integrated feel, plus Spotify integration is there too.

However, it's more than just a few crude sound effects: it's a well-written storyline that starts with you crashing in a helicopter into the town of Abel, where survivors are holed up from zombies.

As you plod along you'll also be told you've collected various items, which you can use to sustain and build your base, which is a side-game in the app. The first thing I picked up was a pair of underwear. Thanks, I'll use that to fortify a greenhouse or something.

Guided by a variety of characters over time, you'll slowly tease out the story of what's happened while running through loads of mini missions that make up this three-season app. This is on top of a regular computer voice that warns you zombies are nearby, and urging you to run to get away.

This is where the real life element comes in – to escape you have to increase speed by 20% for a minute. It's perfect motivation for speed training, as the sound effects are worryingly realistic and get louder and more eerie if you don't just bloody run faster.

I love the idea of this game, but there are a few holes in it: increasing speed by 20% isn't easy. When I tested it properly on the Samsung Galaxy S6, running to 5 min/km and dropping it to below 4min/km (the most rudimentary way I could think of while running) the app still let me get caught by the zombies at times.

If you're going to be offering this as an incentive, it has to be perfect – the feeling of being exhausted and yet still not achieving is powerfully negative and made me want to uninstall right away in an act of petulance.

Irritations like not being able to auto-play the next mission when one has finished, or not knowing how long each session will last are being fixed in the new update, so it's good to see that the creators are improving the functionality over time.

After using this for a few sessions, it's clear that ZR is an app for the new runner, someone that struggles to keep getting out the front door for the third time that week. The incentive of getting new stuff to build the base with, along with hearing what's next in the story, is strong and were it not for the fact it's not conducive to more targeted training sessions like speedwork, hills or track interval training (yet) I'd consider using it as my main app as I was left curious about the storyline.

This still feels like a start-up app, even after a few years' development, but the heart of it is strong – and that's clearly why people staunchly advocate it, with the ZR community growing.