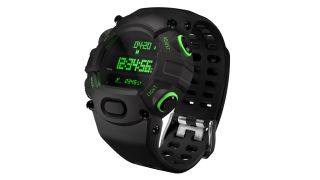 Ready for something more advanced than a regular old watch, but not ready to jump in with the likes of Apple Watch or Android Wear just yet? PC game-accessory manufacturer Razer thinks it has just what you're looking for.

Unveiled at CES 2016 in Las Vegas, Razer's Nabu Watch is a lower-priced wearable that the manufacturer is calling a "digital watch with smart functions".

Priced starting at $149.99/£129.99 and available at RazerStore locations and at RazerStore.com, the Nabu Watch is, first and foremost, a digital sports-style watch with a monochromatic backlit display, automatic time sync and the traditional timekeeping features you'd expect, such as a stopwatch, countdown timer and world clock.

In addition, however, the device has a secondary display that's used to show fitness-tracking info and receive notifications about texts, calls, emails and alerts from your smartphone via the Android or iPhone partner app.

The Nabu Watch can also wirelessly exchange data (such as Facebook and Twitter info) with other owners of the Nabu Watch or Razer's Nabu or Nabu X fitness bands.

Razer is hoping to address the issue of battery life – one of the biggest challenges of the current smartwatch market – by using two batteries in the Nabu Watch. A replaceable coin cell battery powers the main display and promises a year of uninterrupted use, while a rechargeable battery for the second screen is designed to run for a week between charges.

Alongside the standard Nabu Watch, Razer has also released the Nabu Watch Forged, which offers the same functionality but with steel buttons and a full black finish, priced at $199.99/£159.99.