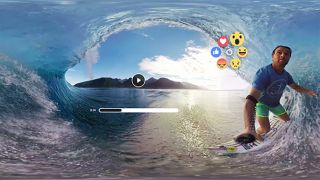 If you felt the only thing missing from Facebook's 360-degree VR videos was emoji reactions then have at it - the social network now lets you post the same one-click responses you can add to any other post to VR videos as well.

Actually, it's Oculus that has announced the news, after teasing the new feature back in March. It relates specifically to watching video through the integrated app on the Samsung Gear VR, though presumably other VR headsets will get the same feature soon.

Of course there's no easy way of typing when you've got an immersive reality box strapped to your head, so the familiar six emojis are a suitable way of reacting to what you're seeing without breaking the flow of the experience too much.

Oculus says the same reactions are coming to 360 photos in the coming weeks, TechCrunch reports. You're also going to be able to see other people's reactions float past your field of view, which should make the VR experience just a little less lonely. Facebook bought Oculus for a cool $2 billion for a couple of years ago.

Find out everything you need to know about iOS 10 in less than two minutes: