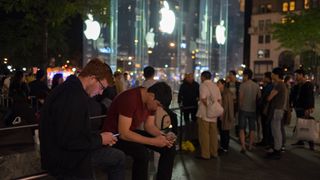 There'll be no queues for the Watch

I have a confession to make. I've queued for an iPhone. It wasn't a big queue, and it wasn't outside an Apple Store, but I was still there on launch day to get my hands on a handset. It's an odd experience, a bit like queuing for concert tickets but with the embarrassment of being a grown adult freezing to death outside a shop for no good reason.

It's got worse since then, of course. Apple Store queues still attract the faithful, but they also attract the arses, the branded T-shirt brigade hoping to catch a passing camera to show the world their sponsors' URLs. Between them and the grey marketeers hoping to grab armfuls of Apple kit to sell on before Apple gets going in their own country, it's all rather tawdry.

Tawdry is not something you want when you're trying to flog eight-grand watches.

In entirely unrelated news, Apple wants to end the launch day lines outside its Apple Stores.

According to a leaked memo that appears to be genuine, Apple retail boss and former Burberry CEO Angela Ahrendts wants a "significant change in mindset". That change essentially means telling the plebs to bugger off, or as Ahrendts put it, "make their day" by telling them "we have more availability online."

I'm being a little unkind, I know, but it's clear that the queues have become something of an embarrassment for Apple, especially when stocks of particular products are very limited. Remember the problems with iPhone 5S supplies when it first launched, and the subsequent stock problems with the iPhone 6 Plus?

It's one thing to have hundreds of people rushing into your store when you come to a new city – that's an expression of consumer desire Apple is happy to put in its keynote videos – but it's not so much fun when the stuff they want to buy isn't in stock.

That's clearly the main motivation for this, but I think it'd be a shame if the queues went altogether. For all that they're often populated by walking billboards and profiteers, they're still a valuable part of the hype cycle and of the overall experience: there's something delightful about taking ownership of a product that people are lining up to get their hands on, especially if you're watching other people still queuing. Reducing or removing the lines might reduce some customers' disappointment, but it's also bound to reduce the overall excitement that comes with an Apple launch.

I can't help wondering whether the "new mindset" is also part of Apple's ongoing move upmarket. That worries me a little bit, because my (admittedly fairly limited: I don't like spending time in places where the staff look at me like I'm a tramp) experience of high-end retail is that it's very intimidating. The Apple Watch retail experience appears to be heading in a similar direction.

The in-store Watch experience for mere mortals doesn't sound like a lot of fun. Watches under glass that you can't touch? No trying one on without first making an appointment? No way to get an Apple Watch in-store, or even order online for in-store pickup? That's a big departure for retail outlets famed for their friendly, go-ahead-you-won't-break-it approach.

Contrast that with what Apple's offering purchasers of the £8K Apple Watch Edition. Private, hour-long one-on-one sessions, or videoconferencing if you can't be bothered setting foot in a shop. Two years of hotline support. A courier bringing the Edition to you if you don't live near a place that sells them.

Maybe these things are unconnected. Maybe the moves to eradicate lines are all about managing expectations and avoiding disappointment, and the Edition buying experience is a separate thing. But there's something off about the thought of Apple Watch Edition buyers walking past queues of bound-to-be-disappointed Apple Watch queuers as they attend their exclusive, private, hour-long buying experience. And maybe that's what Apple's trying to avoid.

It can't be easy, because Apple's catering to two very different kinds of customers. In the 1980s, Apple offered "the computer for the rest of us."

Three decades on, it's making smartwatches for the 1%.