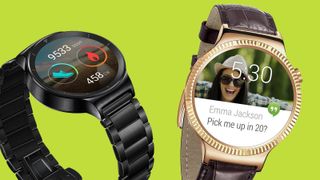 Amazon may have just let slip some details about the new Android Wear Huawei Watch that it probably wasn't meant to.

In a pre-order listing that's now been taken down, the page interestingly listed that the Huawei Watch will be "Compatible with most devices with an iOS 8.2 or Android 4.3 or later operating system."

It's something that has been hinted at since last year, but given that Amazon would likely have the correct information about a new product, we're willing to be that this does pretty much confirm that Android Wear will be compatible with iOS devices in the near future.

And it should be a big coup for Android Wear over Apple Watch, as it will open up the rather large iPhone-user market for those who might not want Apple's smartwatch offering.

What else is in store?

Amazon did also reveal some other interesting details about the Huawei Watch, as well.

The pre-order page listed it to have a 1.4-inch round AMOLED display with 'scratch resistant sapphire glass, as well as over 40 preinstalled watch faces and swappable bands.

Of course, as the listing has now been taken down, the shipping date might change. We'll be keeping an eye out to see if the page does come back up again.