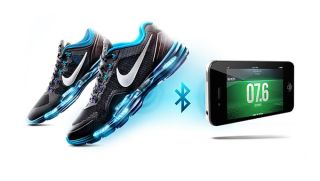 It's been a tricky one this week - I've got a glut of stuff that I want to tell you about, but for the past fortnight or so I've been casting my mind back to the days before I was running these stupidly high levels of mileage each week.

Moving past the fact that the amount of running I'm doing is making me actually consider getting a sports masseuse on retainer to save some money, I've been thinking a lot about my first love while pounding the pavements. The time I felt... a little bit different, like the world was suddenly a very different place. The first time I tried technology on a run.

(Although I equally could have been referring to the first time I noticed April O'Neil's yellow jumpsuit was very fitting and it felt... nice).

In my case it was nearly 7 years ago, two weeks after I joined TechRadar, and I was handed a clever little tie-in between Samsung and Adidas.

And it changed everything.

Even writing those words is evocative... not only was it my first assignment on TechRadar, trialling this phone / fitness combination, but it was something that made me realise that despite being rubbish at self motivation I could still force myself out onto the streets with a semblance of regularity.

The reason was the structured plans of Adidas' miCoach system, with a few simple taps into the phone (using buttons of course... these were the days when a 2-inch LCD screen was just for looking at mostly) giving me my own training plan.

I dimly remember it basically telling me to 'go out and run' on certain days, which I duly did, the electro-competitiveness giving me the jolt needed to want to keep up with my digi-training overlord.

But it was more than that. I'd been 'running' before (well, 7 minutes to the nearby bridge before deciding that I couldn't go any further ever, ever again) but now I had something to finally give me the push I needed. This phone packed something else: sensors.

Well, not exactly packed. You had to clip the stride sensor through your laces like a complicated dreamcatcher, and the heart rate monitor was strapped around my rotund trunk. Still, suddenly seeing my heart rate pop up on the screen was genuinely one of those 'wow... technology is GOOD, eh?' moments, and amazingly the stride sensor was able to tell me how far I was running without the need for a map and compass.

(As a side note, I've recently discovered how wrong that sensor was. I ran the same course recently with GPS tracking on, and when I was celebrating hitting 5KM in 2008 I was barely across 4KM... that was rather deflating).

According to the press release issued by Samsung and Adidas, this was a phone with a 2MP camera and 'rugged' chassis for good grip, which I remember translating to 'bumpy plastic'. Apparently music was delivered to help boost performance, or, according to the release: "The miCoach phone also delivers music to motivate athletes to exceed their limits."

While I certainly never even approached my limits with that phone, it was the first step into the running world and without it I wouldn't have kept going, so thanks for that, guys.

And the great thing is the technology there has a direct evolution in today's running gadgetry: the Adidas miCoach system has developed into a sprawling wonderment of training plans, sensor support and smartphone use, while Samsung's first steps into the fitness world were finally put on the big stage with the Galaxy S4's S Health functionality.

While the phone made running that much easier, there was another thing that came across my desk that helped in a very different way.

The premise was both simultaneously simple and complicated: multiple sensors in the shoes could read pressure and correspond to activities being fired at you by the Nike+ Training app.

Easy in theory, but opening the app and trying to pair the shoes was a mission of failed connectivity and confusing training plans on the iPad / iPhone (Android users were sadly kept out in the cold), so it meant you REALLY had to want to use the system and pay top whack for the privilege.

But I will say this: they were really, really cool. Like the miCoach phone's heart rate monitor, when I finally paired the shoes with the app and saw a 'heat map' of where my weight was shifting in the shoes in real time it was an awesome moment, one that made me think, definitively: 'this is the future of training'.

And for the most part, the accuracy was sensational. Whether it was burpees (ask your Mum), squats or lunges, there was no way to pretend that I had actually performed all the reps asked of me when I'd been just eating crisps, as the app would sit there and quietly admonish me for not doing better than last time.

Side note: when thinking about using the app, I had to work out why I was left with a strong sensation of a fluffy rug... then I recalled finishing one workout, being so tired that my legs gave way and accidentally licking the carpet. I'm not ashamed to admit that happened in a bid to prove I did at least give this stuff a thoroughly good go.

The shoes also had a function that could help tell you about your running gait, although that wasn't the point of the TR1+ range... the annoying thing was that these purple monstrosities were no use for running, as they were too inflexible and solid in the sole, so it felt like I'd lightly dipped a pair of running shoes in concrete.

But for strength workouts - a pivotal part of my training these days as I destructively search for more speed - they were brilliant.

So here's the curious part. As I thought back to these shoes, I decided to dig them out. I found the sensors, the cradle to charge them, and I realised they would still be brilliant for training. I went to pull up the app on my iPad... only to find it wasn't there any more.

The Training app from Nike has been pulled from the App Store. The shoes are no longer supported. The sensors have been quietly walked into the woods and shown the wrong end of a blunderbuss, it seems - which is weird given they worked so well.

Admittedly, the cost was too high (over £200 for the system) but I thought that technology like that was going to be the future. Apparently not.

That said, the Lunar TR1+ system does have a bearing on today's fitness technology. While the sensor idea seems to have been cast away from shoe design (in a similar way to Nike giving up on the FuelBand) the use of smartphone and tablets to track a workout is more prevalent than ever.

All brands (not just Nike) have realised that removing the cost barrier to entry (of having to buy expensive shoes and sensors) will mean more users will jump on the fitness bandwagon. Where the Training app back in 2012 had a handful of users, there are many, many more using the pre-defined plans on this and multiple other options.

In short, by doing away with the sensors Nike helped make the smartphone the ultimate fitness tool - although I'm still angry that this awesome technology from three years ago already doesn't work.