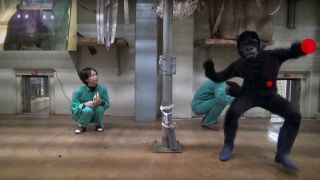 Apes can recognise bits of movies and anticipate them, according to Japanese researchers who filmed themselves wearing King Kong costumes and carrying out attacks on people to prove it.

The researchers used laser eye-tracking technology to see if the animals noticed and remembered key moments when the same film was shown on two consecutive days. In tests involving six chimpanzees and six bonobos, the apes looked at the doorway where the ape character was about to enter around three seconds before it appeared.

In the second movie, however, the pair tweaked the film slightly before re-showing it to the apes - the positions of the two weapons were swapped. The apes looked at the weapon used in the first showing, not the place it had been in the first showing, indicating that they knew what would happen next.

"The fact they remembered such details from the previous video was really impressive," Kano told New Scientist, adding that the skill could have developed either in social situations with other apes or to help them recognise impending danger.

The next step, he says, is to see whether the apes can understand the plot of a movie. Probably best we don't show them Planet Of The Apes, though, yeah?

Details of the pair's experiments were published in Current Biology.