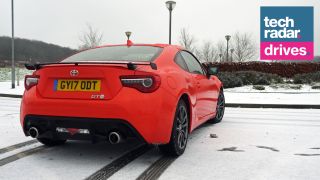 As I drift around an icy roundabout at the foot of a steep Staffordshire hill, I curse the British weather - there's snow everywhere. There was none of this white stuff yesterday and I have almost 200 miles to drive to get home.

To say the weather conditions were less than ideal for testing the Toyota GT86, a small, lightweight, rear wheel drive sports car, would have been an understatement. And yet, as I feathered the throttle and controlled the slide, a smile crept across my face.

The plucky 4-cylinder boxer engine makes such a delightful gurgling sound you can't help but smile when it kicks into action, even if you are going unintentionally sideways.

With that I was off up the hill, and hurtling towards home.

The Toyota GT86 is the firm's sporty option that takes its cues from past performance vehicles such as the 2000GT and Corolla AE86.

Prices start at £28,000 ($28,385), but our Club Series Orange Edition came with the Touch2 with Go infotainment system (an additional £750) and the stand-out orange pearlescent paint (adding £650 to the final price tag).

However, the GT86 is the better looking car. With its brighter paint finish - accented by the black rims, rear spoiler and front grille - it's a striking head-turner.

In the cabin, there was comfortably enough room for myself and my passenger, which is great news when you consider we're both easily over six foot tall.

While the front has space for two adults, it's quite the opposite behind. There are two rear seats, but they're for show more than anything else. Small children will be okay, assuming you can wrestling their seats into place. But anyone who has outgrown the booster seat, it's not an appealing place to be.

That said, who buys a car like this to ferry around three additional adults? They'll only add to the weight. Pah.

One thing that does feel like it's been squeezed in, though, is the handbrake. It sits very close to the driver's chair and offers little in the way of space for large hands to comfortably operate it.

You sit close to the surface of the road, providing the car with a low center of gravity, and along with slightly stiffer suspension things are kept nice and stable and allowing you to carry some extra speed through corners, with the nippy, agile engine pumping you out the other side at a pleasing velocity.

Looks can be deceiving

Starting the engine, which could just about be heard above my childish giggle as I got excited with the playful engine tone, my eyes focused on the 6.1-inch touchscreen infotainment system in the center console. Unfortunately, I felt a little underwhelmed.

It certainly doesn't look as slick as many implementations in modern cars and I felt nervous about using it as I've been burned before by poor sat-nav integration - one time it ended up placing me on a dirt track which was so rough it almost snapped the suspension on my poor little Vauxhall Corsa.

However, the tech in the GT86 performs better than perhaps its looks suggest.

The on-screen experience is intuitive, and the sat nav was easy to program - and to follow. It also includes accurate traffic updates which are always useful when on long journeys.

You can sync your smartphone to the GT86 via Bluetooth, allowing you to make and receive calls through the car using the steering wheel mounted controls to keep things hands-free.

You can also stream music from your phone (including from third party apps such as Spotify) with track information appearing on the screen. The on-wheel controls also allow you skip tracks and adjust the volume ensuring the experience is kept fluid.

If you phone is running low on juice, a USB port allows you to keep it topped up (although charging is slow), while a 3.5mm audio jack allows you to connect your iPod or other music player to the GT86's punchy six-speaker audio system.

The central display isn't the only screen on the dash of the Toyota GT86, as there's a 4.2-inch panel integrated into the instrument cluster.

You still get the analog speed and rev counters, but this additional screen offers up handy information such as fuel level, MPG (miles per gallon), distance until next fill up, trip stats, average speed, speed, gear and the outside temperature.

You can use steering wheel controls to cycle through various display options, but slightly annoyingly you can't get sat-nav instructions to display in this window.

It means your eyes need to dart back to the center console every now and then to check the route. It isn't much of a problem, but considering there is another screen more directly in your eye line it feels like a wasted opportunity.

There are a couple of passenger comforts too, included heated front sport seats and climate control to ensure your trip is comfortable (assuming you're not in the rear seats), plus automatic lights, rain-sensing wipers and a rear reversing camera all make driving the GT86 that little bit easier.

Cruise control is another useful addition, the controls for which are nestled behind the steering wheel on a stalk in the 4 O'Clock position. It's easy to set, and details of the settings are display on the screen in the instrument cluster.

There's enough tech in the Toyota GT86 to keep the nerd inside me happy, but this isn't a car that's focused on the tech - it's about the drive, andin that respect it's a lot of fun.

If you're considering a sporty two-seater (yes, it technically has four seats) that's not going to break the bank than the Toyota GT86 has the looks, the sound and the punch to keep you entertained day after day