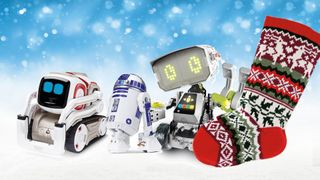 There comes a time when you realize you’d quite like socks for Christmas. That pants are a thoroughly useful and considerate present, particularly if they have the Cookie Monster printed on them.

That’s right, we all get old.

However, the kids don’t want socks. Guaranteed. And if you look deep inside there’s still a part of you that wants to be playing with Lego at 4pm, not watching Christmas-themed soaps or shows where celebrities dance/sing/eat insects.

Here are 2017’s top Christmas present toys and techy playthings for the kids. And adults with enough kid left in them to want to avoid arguing about politics over the Christmas dinner. Get involved.

We remember the days when Sphero was just a weird ball you could control with your iPhone. Simpler days.

Now you can get all sorts of Star Wars goodies from this clever radio controlled upstart company. Last year we had the BB-8 droid, but for Christmas 2017 we’re going old-school with the Sphero R2-D2. It looks and sounds just like the droid from the classic Star Wars movies.

You control the little guy using a phone app, and even his head swivels for that legit R2-D2 feel. But, no, you can’t project holograms. We may have iPhones, but we don’t have all of Star Wars’ tech just yet.

Sony probably wouldn’t like us calling PlayStation VR a toy, but in the techy plaything stakes few things will nip a Christmas break lull in the bud like this virtual reality headset. Caveat: you will need a PS4 too.

For the uninitiated, PSVR (just about) covers your entire field of view, transporting you to 3D game worlds just like you imagined as a kid. It’s an intense experience so you may want to start off with something quick and easy like PlayStation VR Worlds: the deep-diving ocean trip is one of our faves.

However, there are full games available with VR now too, including Gran Turismo Sport, Skyrim VR and, for the bold, survival horror smash Resident Evil 7.

The closest you'll get to having your own droid

The Anki Cozmo was available last Christmas in the US, but it has now gone global. And it’s undoubtedly one of this year’s hottest techy toys.

A camera lets it see and it can recognise a series of included blocks, as well as edges of surfaces and other objects – including faces. Fresh out of the box it’s packed full of personality, a screen giving it animated eyes, and the speaker lets Cozmo “speak” to you with droid-like noises. It’s way cuter than you could ever grasp from just a picture.

Cozmo Code Lab is what will keep this toy going long after Christmas day, though, as it lets you program Cozmo to do all sorts of things. And its capabilities are only growing.

Mini drones are like fidget spinners. Start looking for a cheap one and within minutes you’ll be knee-deep in options from companies you’ve never heard of that we’re not sure we’d recommend putting in your kids’ hands. Watch those fingers.

The Kaiser Baas Theta Mini drone is a solid mini drone pick you can actually find in major retailers other than Amazon. And it has blade guards to avoid your mischievous 5-year old trying to cut your hair with the thing.

It also uses a controller pad that looks a lot like an Xbox’s. Extra features include a 720p camera that records to 32GB internal storage and aerial acrobatics the Theta Mini can perform with the press of a button.

Does not include Vin Diesel in Santa costume

Anki is fast becoming one of the best makers of tech-infused toys. To get your head around Overdrive, think of it as a cross between Scalextric and a racing video game.

There’s a real track you build in your living room, and real mini cars race along it, but you control them using a phone or tablet rather than an RC controller. The app lets you control the speed and the “lane” your racer is in, but the real fun comes with weapons.

These let you disable other racers, just like Mario Kart or Wipeout. No charred carpet is needed, though, as the cars communicate with each other, rather than literally blowing each other up. They are like mini computers, and have IR cameras. Anki Overdrive is smarter than it looks.

New for this year, you can get a Fast and Furious themed starter set, which includes two cars from the films.

Kids spending too much time on the iPad? Osmo is one of the best ways to make sure their eyes aren’t glued to the thing even when they are using it.

Osmo uses a camera that slots onto the top of your tablet, letting it see a “play surface” in front of the slab. Different Oslo packages then let the kids play with play pieces, word counters and “coding” blocks that correspond to apps on the tablet. It lets educational games break out into the real world.

It’s neat idea. Oslo Masterpiece also helps teach your child how to draw, testing their hand-eye coordination by getting them to trace an image displayed on the tablet screen.

If, like us, you remember Meccano as “Lego that’s too difficult”, Max may fill you with fear. However, it’s a great way to give your child a context for learning about programming.

Meccano Max is a robot you build and then program, using a phone app. Like any Meccano kit, just building Max will suck up a good few hours. It has an IR camera, a tilting head, moving wheel as a hand that can grab things. All of these can be programmed. A phone slots into the little guy’s head to act as its eyes and ears.

If the idea of STEM robotics programming is a bit too much for your child (or you), Max also offers games and customisable faces, displayed and animated on the phone screen.

Everything you need to get Raspberry Pi-ing in one box

If you bought a Raspberry Pi with the aim of learning to code, there’s a good chance it’s now getting dusty and rusty in a corner somewhere. However, the Kano Computer Kit’s aim is to ease younger folk into the programming process, so the learning curve doesn’t seem like a 100ft wall.

It’s comprised of a Raspberry Pi, a funky orange keyboard, a case, LED light kit and all the other little accessories needed to get a Pi up and running. Kano also offers a package with a screen and speaker, if you don’t have a monitor or TV to use.

The real hit part of the Kano setup is the “storybook” manual and software, though. If you’re on a tight budget this Christmas, you can actually download the Kano OS software for free, letting you snag a solo Raspberry Pi 3 for much less cash.