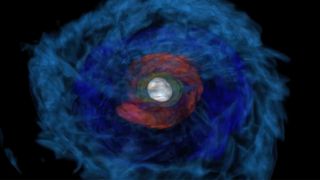 A hundred and thirty million years ago, two neutron stars in a galaxy far, far away crashed into each other and merged into a black hole. The impact was so large that here on Earth, 40 million parsecs away, we felt spacetime rumble.

How do we know? Well, two months ago we watched it live. The stars were so far away that it took 130 million years for the tremors to reach us - which they did on 17 August 2017.

The collision generated the strongest, longest gravitational wave signal seen in the two years since we set up detectors, and astronomers have been able to use the data gathered to solve a host of cosmic mysteries.

But let's back up a minute. What are neutron stars? Well, you'll probably remember from school that our Sun has a limited lifespan. In about four or five billion years, it'll balloon into a red giant, consuming most of the solar system in the process. Don't worry, odds are that humans will be long extinct by that point.

Afterwards it'll collapse down into a white dwarf and then slowly cool down to the background temperature of the Universe. After an unfathomably long time (so long that it hasn't actually happened anywhere in the Universe yet), it'll be so dim that it'll turn into a black dwarf.

Stars that are much bigger than the Sun, however, go down a different path. They don't slowly balloon into red giants, instead exploding in an impressive supernova. What's left afterwards is incredibly dense and hot - so dense that a matchbox full of it would weigh about three billion tonnes. It's also spinning super fast - as much as several hundred rotations per second. This is a neutron star.

Particularly dense neutron stars collapse fairly quickly into black holes, but smaller ones whizz around the Universe for a while - some emitting beams of radiation like a lighthouse that we see from time to time from Earth (these are called "pulsars"). And it's two of these smaller neutron stars that collided 130 million years ago and that are getting scientists so excited right now.

The collision of the two neutron stars forced the density of their innards up to a level where they were no longer stable and they collapsed into a black hole. In the process, it generated a flash of light that was so bright we could see it on Earth.

That light was particularly interesting, because it contained proof of something that astrophysicists have long only guessed at - that the elements of the periodic table that are heavier than iron are formed in such stellar collisions. These collisions are rare, which is why those elements (which include gold, platinum and uranium) are rare compared to lighter ones like hydrogen, carbon and oxygen.

Another mystery that the data from the event solved was that neutron star mergers trigger short bursts of gamma rays. For years, astronomers have only been able to guess at where mysterious gamma ray bursts come from, but now the hypothesis that they come from neutron stars colliding seems to be confirmed.

In total, astronomers have published more than 30 papers across five journals as a result of the event. But observatories around the world were forced to cease their work after a few weeks of study, because our Sun passed in front of the part of space where the event occurred - like a gigantic celestial photobomber. Radio telescopes are still tracking it, so more discoveries could still be made.

“All our hopes and dreams have basically come true,” Jocelyn Read, an astrophysicist at California State University, told Nature.

“All this time we have been saying, look at this amazing thing we are going to be able to see. And it is still hard to believe when it actually happens.”