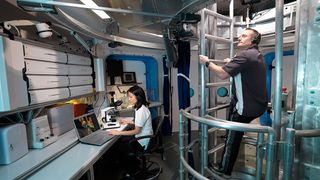 For a long time, microbiologists have been saying that you should stop thinking of yourself as "me" and start thinking "us". Why? Well, the various microbial flora and fauna that live on and in our bodies are essential to our continued existence.

However, though there are good microbes there are also more harmful microbes; the kind that cause infections, food poisoning and other illnesses. As the balance between good and evil in any comic book universe will tell you, it's hard to have one set of these microbes without the other, which is going to be a problem on any future missions into space.

We know this thanks to the findings of a research team led by Petra Schwendner from the University of Edinburgh. Schwendner and his team examined the Mars500 project – a simulated spaceship that was inhabited for 17 months by a six-man crew of Russians from 2010 to 2011. Specifically, they studied how the populations of microorganisms changed during the experiment, both over time and in different areas of the craft.

"Until now, little was known about the influence of long-term confinement on the microorganisms that live inside habitats that may one day be used to travel to other planets, and whether the structure of the microbiota changes with time," said Schwendner.

Their results showed that confinement dramatically shaped the bacterial community on board the spacecraft. Different areas had specific bacterial signatures, with communal areas, sleep areas, the gym and the toilet having the greatest activity. The lowest numbers of bacteria were found in the medical module.

The most common bacteria were those associated with humans, like Bacillus and Staphylococcus. These were probably dispersed by the crew themselves and while they're rarely lethal, they can be associated with skin infections – particularly in people with compromised immune systems.

The good news, though, is that the team's cleaning schedule kept the worst of the microbes at bay.

"Although we located some microbial hotspots where the number of bacteria was much higher than in other areas," Schwender said, "we were quite relieved to find that the overall bacterial counts were within the acceptable limits."

"Due to appropriate cleaning measures, the microbial community inside the habitat was under control at all times with no or little risk for the crew."

Unfortunately disease isn't the only risk posed by microbes. "In addition to potential health risks for the crew, some of these microorganisms could have a negative impact on spacecraft, as they grow on and might damage spacecraft material," explained Schwendner.

"To ensure the systems' stability, countermeasures may be required to avoid development of highly resistant, adapted microorganisms, and a complete loss of microbial diversity."

The full details of the study were published in the journal Microbiome.