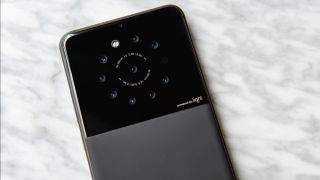 How many lenses is too many for a smartphone? Huawei is offering the most on the market with three rear sensors on the Huawei P20 Pro... but how about nine?

That's what's coming from camera-maker Light later this year, according to The Washington Post. The brand, which has huge smartphone maker Foxconn as an investor, is apparently set to launch a phone with the multi-sensor array later this year.

That's quite a lofty goal for a brand that only has working prototypes right now - with lenses numbering between five and nine - so it's a long way from ready with only six months left to go.

A lot to be done

It's possible - but would require a lot of work from Light. Its L16 camera, with a 16 sensor array, has had mixed reviews and question marks over low light performance, while costing a hefty amount.

To overcome those issues while creating a great smartphone and one that takes Pixel-and-Galaxy-beating photos is a tall order for a new brand, especially one that will probably need to charge a lot for the experience.

Still, it's an interesting idea, and if any of the results are market leading (some of the L16's capabilities are apparently incredible, for things like zoom capabilities) then the bigger players will be scratching around looking to replicate the same thing.