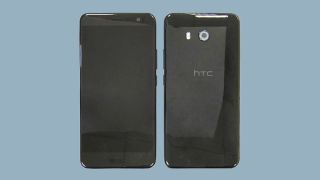 We've already seen flagship phones launched by the likes of LG, Huawei and Samsung this year - but there's plenty more still to come, including a premium handset from HTC that it's calling the HTC U and is the successor to last year's HTC 10.

Now we've been given our first proper look at the HTC U, courtesy of serial tipster Evan Blass on Twitter. We get front and back shots of the device, finished in black, though unfortunately the screen isn't switched on, making it tricky to pick out the edges of the display.

Based on everything we've heard about the HTC U so far, we're expecting a device offering a 5.5-inch, 2,560 x 1,440 pixel display, a Snapdragon 835 processor, a microSD slot for extra storage and a 12 MP rear camera for capturing everything you see in the world.

While this picture doesn't come directly from HTC, Blass is pretty much the most reliable tipster around, so we'd say there's a very strong chance that the image is genuine. Most insider sources suggest HTC is readying an official unveiling before the end of the month, so we shouldn't have to wait too long to get this confirmed.

From the photos it looks like HTC might have switched to an all-glass back panel this year, though the fingerprint sensor apparently remains on the front with a physical home button. Down the edge of the device is what could be the rumored Edge Sensor, a button for extra control and scrolling.

Speculation about such an input method has been swirling for months and it would help the HTC U stand out just a little bit from the Galaxies, Pixels and iPhones of this world. As soon as HTC makes the handset official, we'll let you know.