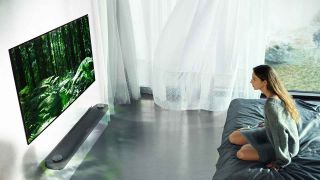 Despite there being more OLED TVs than ever, 2017 proved that the tech is probably never going to be affordable

For a decade now, OLED TVs have felt like they’re on the cusp of becoming mainstream.

Their tantalising combination of thin screens, insane black levels, and fantastic viewing angles are a world apart from what mainstream LCD displays are capable of.

OLED TVs are just plain better, and for years it’s felt inevitable that they would eventually grow to take over the entire TV industry.

Because that’s how technology is supposed to work, isn’t it? There was a time when LCD ‘flat screen’ displays were similarly outrageously expensive, but as more manufacturers jumped on board with the new technology, a combination of competition and better manufacturing processes inevitably caused prices to tumble.

It’s happened time and time again to different technologies. Smartphones have gone from being something only your tech-obsessed rich friends could afford to being cheap enough that you’d never think to buy the alternative. For better or for worse, the modern car has gone from being the ultimate status symbol at the turn of the 20th century to being something that almost every family in the western world owns.

And yet despite the fact that in 2017 TV manufacturers ranging from Sony to Philips, Toshiba and Panasonic now sport OLED TVs at the tops of their lineups, prices have failed to hit a point that we’d consider mainstream, especially since only 10% of TVs sold actually cost more than $1,000.

For a while OLED TVs looked like they were going to act like any other technology, and see its price fall as more and more companies started producing them. Sony announced its first OLED TV (the XEL-1) at CES 2007, and Samsung revealed its own Full HD OLED TV in 2008.  LG followed suit in 2010 with the 15EL9500, its first 15-inch OLED television.

But then the realities of OLED production began to sink in.

As it turns out, making massive OLED screens is really really hard. Yield rates are low, which means that a manufacturer has to price the panels for the amount of dud versions that are produced before they get one that works.

The result was that, one by one, each TV manufacturer stopped producing OLED panels. Samsung turned its attention to Quantum Dot technology, which it sees as having the more certain future, while Sony focussed on using better picture processing technology and backlighting to get the most out of LCD displays.

Just one manufacturer, LG, stuck with the OLED TV tech.

Fast forward to 2017, and the situation seems to have completely reversed itself. Almost every major manufacturer (barring the QLED obsessed Samsung) now has an OLED TV sitting pretty at the top of their lineups. Sony has the excellent Bravia A1E, Panasonic has the EZ1002, and even the TP-Vision-owned Philips has released a couple of OLED sets.

But look closely and you’ll realise this isn’t quite the competition that’s needed to make OLED TV prices plummeting.

That’s because while Sony, Panasonic and TCL are all technically releasing their own OLED TVs, they’re all still using panels produced by LG Display, a subsidiary of LG.

And with all of them needing to use another company’s tech to produce their TVs, they’re pretty restricted with how low they can take their prices, leading to most manufacturers promoting their TVs as the ‘premium’ alternative to LG’s lineup with better picture processing, and more fully-featured smart operating systems.

The end of the mainstream dream?

There’s every possibility they’ll get cheaper, but not at the rate that true competition in the market could ever achieve.

All of this means it might be time to give up on the dream of every TV one day being an OLED, but that’s not to say that the future for TVs is all doom and gloom.

For one thing, LCDs have gotten so much better over the years. Fancy backlighting techniques mean that the contrast they can offer is better than ever, and a range of other tweaks has mitigated many of their other early issues.

But more importantly, there are a host of other technology that get many of the benefits of OLED TVs that are on the cusp of making their way to consumers. Self-emitting Quantum Dot displays might emerge as early as 2018, and Micro LED tech might be able to finally unite the LED and LCD layers of a TV into one fantastic panel.

These technologies themselves aren’t going to become mainstream for some time, but at this point we’ve got higher hopes for them than we do for OLED. It’s time to move on.