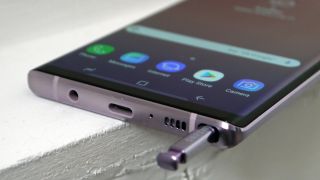 Not long to go now until the Samsung Galaxy Note 10 sees the light of day – an August launch is expected – and the latest from the rumour mill suggests at least one Note 10 model is ditching expandable storage.

Max Weinbach from XDA Developers took to Twitter to reveal a few Note 10 tidbits from a source who's played with two of the upcoming phones. Apparently a microSD card slot is only present on the Pro model.

That would be a break with tradition for Samsung, as expandable storage support has long been a mainstay of its flagship phones. The Galaxy S10 phones can take up to 512GB of the stuff.

Admittedly the standard Note 10 will no doubt come with plenty of internal storage on board, but having the option to expand it is always useful.

About that headphone jack...

Weinbach's tweets also weigh in on the continuing saga over headphone jack support in the Galaxy Note 10. Depending on which sources you believe, the Note 10 will have or maybe won't have a 3.5mm audio port.

According to these latest leaks, the headphone jack is being retained on both the Note 10 and the Note 10 Pro, so you can carry on using your old wired headphones as usual (or invest in a new pair without having to switch to USB-C or wireless).

This will be the first year that Samsung launches a Pro edition of the Note alongside the standard model – if the rumors are accurate. The multi-model strategy has worked for the Galaxy S series, so Samsung is apparently keen to expand it.

Based on previous Note launches, we should see the new phones appearing sometime in August, bringing with them some speed and camera boosts over the 2018 model. As always, we'll bring you the news as it's made official.