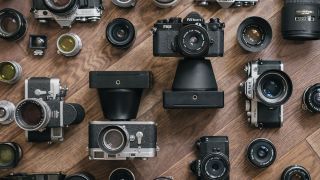 If you've got an old film camera gathering dust at home, NINM Labs may be able to give it a new lease of life with its Instant Magny 35 back.

It's not a digital back, but rather an instant film back that can be mounted on your 35mm SLR or rangefinder camera. The Instant Magny 35 uses Fujifilm's Instax Square film, and it doesn't require you to butcher your film camera – you simply have to remove the original camera back before replacing it with what NINM terms an 'enlarging optic film back'.

These have been designed to fit various popular film cameras from Leica, Nikon, Canon, Olympus and Pentax – at launch the Instant Magny 35 will be compatible with up to 35 film cameras.

After attaching the enlarging optic film back to the rear of your camera you then attach an aluminum lens barrel to it, and a film ejection unit is screwed in at the base of the barrel.

Once the three parts have been attached correctly, you simply have to pull the dark-slide out and you can shoot with the camera as if you were shooting with film. Once you've fired the shutter, press the film ejection button on the base of the film ejection unit and wait for the film to develop.

Interestingly, the photo you see will be a mirror image; this is due to the focal plane of the Instant Magny 35, which runs through a monolithic mirror. NINM reckons this will be good for portraits, as the subject will be more comfortable and familiar with the reflected image they see of themselves – it won't be so useful if you're shooting familiar landmarks or scenes containing text.