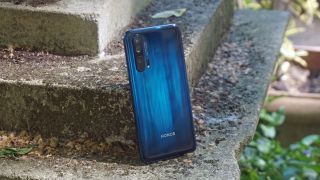 Honor isn't going to be left out of the 5G phone party any longer: Honor President Zhao Ming has announced that the 5G-toting Honor V30 (probably called the Honor View 30 internationally) will be launched next month.

The news came at the World Internet Conference in China (via GizChina), but we don't yet know exactly when in November we'll be able to get our hands (or even our eyes) on the next-gen handset from Honor.

Honor had previously promised to get a 5G phone out before the end of 2019, but we're still not sure about some of the specifics – although the company has said that the super-fast connectivity will be used for augmented reality and AI.

Room for a View

We usually see a new Honor View phone at the start of every year, but these devices can take a few months to become available outside of China. Now, though, it seems Honor is accelerating that timeline.

Honor owner Huawei has already confirmed that the range will run the latest Kirin 990 chipset, and based on leaks posted to Chinese social media we're looking at triple- and quad-lens rear cameras for these phones, with a punch-hole (or two in the Pro edition) embedded in the display for the front-facing camera.

A bigger battery and wireless charging are also being mooted for the Honor View 30 Pro. Despite these impressive-sounding specs, though, this being Honor both the Pro and the standard edition should come in at an affordable price point.