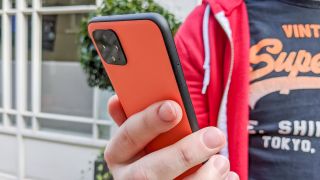 Don't let someone get a hold of your Google Pixel 4. It has been confirmed that the Face Unlock feature for the Pixel 4 and Pixel 4 XL will still work even if your eyes are closed, the BBC reports.

TechRadar can confirm that even Google knows this might be an issue: in Security settings, a disclaimer warns users that their phone can be unlocked if someone holds the phone up to their face - even if their eyes are closed.

The issues with that are obvious. If Google's Face Unlock will grant access to your phone even when your eyes are closed, then all someone has to do is hold your Pixel 4 up to your face while you're asleep. Anyone could access your phone without even needing you to be awake - or, in theory, alive.

This is a serious security concern, as forcing you to unlock your phone would be very easy this way. Worse still, Google has gotten rid of the fingerprint scanner on the Pixel 4, meaning there's no alternative biometric security option. You could go with a PIN or pattern, but those unlocking methods are less convenient for anyone who checks their phone frequently.

A history of biometric security issues

In all fairness to Google, this is far from the first major flaw with a biometric security system. It's not even the worst case in recent memory.

People have fooled facial scanners with photos of a user's face. In the case of the Pixel 4, Google told the BBC that the Face Unlock feature wouldn't be fooled by photos or masks.

Even if fingerprint unlocking were an alternative for the Pixel 4, it suffers from some vulnerabilities as well. If you're incapacitated or a heavy sleeper, someone could just as easily put your finger to the sensor and unlock your phone. Samsung is facing some embarrassment right now, as its Galaxy S10 has a flaw that lets any fingerprint work with the fingerprint scanner.

So, even if the Google Pixel 4 isn't perfectly secure with its biometric sensors, this isn't looking like the worst security flaw. And, there's still time for Google to fix the issue before it faces consumers.

The Pixel 4 will be available October 24, and Google is still working to improve the feature. And, earlier leaks of the Pixel 4 had shown a settings option to require open eyes for Face Unlock, so it may be a feature update that can roll out sooner than later.