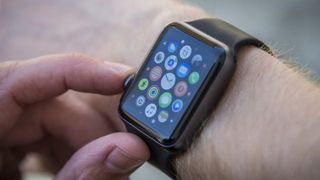 Apple apparently has a team working on technology that would enable blood sugar to be monitored by a wearable device. The team – and any progress they've made – are currently top-secret, but as it’s wearable tech it’s safe to assume the device will be an Apple Watch or something similar if the project comes to fruition.

The tech giant isn’t by any means the first company to try its hand at this technology, but hearing about actual progress from a big player is exciting.

If Apple manages to get the technology to work it could be revolutionary for diabetes sufferers, who currently have to go through a convoluted and invasive process every time they want to check their blood sugar.

Currently measuring blood sugar requires piercing the skin, applying a small amount of blood to a test strip, then inserting the strip into a blood glucose monitoring device. The process is unpleasant and time-consuming, and the need for a constant supply of strips can become an expensive proposition.

By contrast, this development would work using optical sensors to shine a light through the skin to test for sugar levels in the blood. If it works, it would be a revolutionary development, although not an inexpensive one for Apple.

The executive chairman of industry-leading glucose-monitoring company DexCom, Terrance Gregg, has previously said that to succeed in this field would cost a company “several hundred million dollars or even a billion dollars”.

It would be worth it though, with a recent study at the University of London estimating that the global cost of diabetes is now $825 billion a year.

The research is part of an overarching project envisioned by Steve Jobs, to develop a piece of wearable tech able that could measure a number of vital signs including heart rate, blood oxygen, and blood glucose.

Heart rate monitoring is now fairly ubiquitous, and the new Garmin Vivosmart 3 is one of several fitness trackers with the ability to measure vo2max, but blood glucose is still proving a tough a nut to crack.

The project has apparently been running for five years but has been expanded recently, with Apple purchasing a number of companies in the field and creating a number of health-related jobs at its Palo Alto campus.

According to CNBC, the product is far enough along that Apple is running feasibility trials, and is looking into regulatory pathways in the US.

In an interview with The Telegraph back in 2015, Apple CEO Tim Cook said of the Apple Watch: “We don’t want to put the Watch through the Food and Drug Administration (FDA) process. I wouldn’t mind putting something adjacent to the Watch through it, but not the Watch, because it would hold us back from innovating too much, the cycles are too long.”

Could this mean that any blood sugar-monitoring device would be a separate device to the Apple Watch? Possibly. Or perhaps Apple could find a loophole whereby the device is marketed for its 'fitness' benefits rather than its health benefits, which might mean it didn't have to get FDA approval.