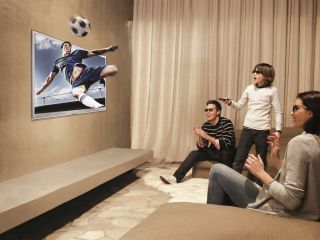 The box is changing, but not as much as you might think

The latest LED-backlit models might have 'smart' features, BBC iPlayer apps and 3D, but that's only the beginning of the journey for the humble TV. Over the next decade the TV is set to become bigger, sleeker, greener - and even higher-def.

"Judging by the advances in the past decade, the next 10 years look set to offer consumers another collection of jaw-dropping developments," says Stephen Gater, CE Consumer Marketing Director at LG.

"Whether it is large-scale OLED displays or glasses-free 3D; one thing is sure, home entertainment is set to get even more immersive and bring consumers closer to the action." Let's start with OLED.

OLED: Deliciously slim, with jaw-droppingly good pictures (the inky blackness alone is wroth the investment), but damned expensive. LG already sells its £1,500 15-inch 15EL9500 OLED TV, and is currently the only company to do so given Sony's decision to cease production of its look-what-we-can-do XEL-1 from a few years ago, which presumably never reached an economy of scale.

"It is well known that OLED displays offer the ultimate in picture quality, lower power consumption and an ultra slim design," says Gater. "As such LG is committed to launching a large screen OLED TV in 2012 to meet the consumer demand for this new screen technology."

"We will see a couple of big brands go to OLED TV, if only to make life difficult for their competitors," thinks Paul Gray, director of Europe TV market research at analyst firm DisplaySearch. "I'm not sure that OLED can be significantly thinner - 5mm is probably a finite limit below which any TV is too fragile to be practicable. With LCD already at 8mm, I doubt if consumers care much about a little less."

Gray also points out that OLED will cost more as it's a new and immature technology, with no production facilities in existence. Whether OLED can catch-up, and overtake, LCD is by no means certain - does anyone remember what happened to Toshiba's SED, hailed back in 2007 as the future of the flat TV? Nothing, that's what.

Many of the 2011 ranges of TVs from the major brands don't go below 40-inch, suggesting that either there's little profit to be made in the under-40-inch sector, or our appetite for ever larger screens is continuing.

"Larger screen displays will become the norm, with smaller screen sets a smaller proportion, while the vast majority of sets will be connected," says Carl Hibbert, head of broadcast research at analyst firm Futuresource.

Paul Gray is not so sure: "Screens will be a little larger, but probably only 5-10-inches more than today - consumers have other constraints such as room size." That's especially true in Europe and Asia, though the 50-inch+ size category is growing in popularity.

"TVs should be able to display seamlessly from mobile, personal and handheld devices, and consumers should be unaware of whether they are watching from broadcast, the internet or from storage," says Gray.

An Apple AirPlay-type experience - as enjoyed by the Apple TV and assorted other audio gear - is long overdue on mainstream TVs, though content will always be king.

"The vast majority of sets will be connected," reckons Hibbert, "with Pay TV subscriptions co-existing with online content and OTT TV, both for free and paid-for content."

GETTING SMARTER: Will so-called 'smart' TVs soon be able to perform Apple AirPlay-like transfers between devices?

The main problem with glasses-free 3D TVs that use lenticular lenses actually on the panel, as anyone who's seen Toshiba's Qosmio F750 3D laptop or prototype 'Cevo' LCD TVs at January's CES knows, is the viewer's position.

There's a series of sweet spots, or corridors, where the 3D effect is excellent, but far too many gaps between to make this a practical, and comfortable, experience for more than one very still viewer.

The answer is to get more 'views'. "It looks as though the technology is around five years away," says Gray, "although there will be some flagship products earlier - Toshiba already sells small quantities in Japan."

Are we likely to see effective glasses-free 3D TVs in the near future? Steve Lucas, product specialist at Panasonic, thinks so: "We will see reasonable quality glasses free 3D TVs within the next five years," he says. "Effective glassless 3D systems will be the ultimate 'goal'." And that comes from the maker of the most highly rated Active 3D TVs around.

As well as bigger and better OLED TVs, trade shows like the CES and IFA in recent times have seen the debut of Ultra HD displays using - you guessed it - 4,000x2,000 (or thereabouts) pixel resolution panels.

Ultra HD (4K) is thought to be essential for 'multiview' glasses-free 3D TVs to flourish (see below).

So will 4k TV resolutions ever hit the mass market? "As with any advances in screen resolution, 4k's success will depend on the volume of content that is compatible with the format," says LG's Gater.

"However, this is a very exciting technology - and one that will raise the bar in picture quality."

Panasonic's Lucas is more conservative, mindful of how slow progress is. "This will be driven by the broadcast industry," he says. "HD is still not mass market."

Gray isn't sure if 4K is needed: "They are coming in limited quantities later this year, but the question remains: exactly what is the value proposition of extra resolution?" he says. "Will consumers pay significantly more for 4k2k programming over HD? Definitely monitor and PC resolutions are due for increase as monitor screen sizes have grown."

Liked this? Then check out: 4K TV resolution: what you need to know

Sign up for TechRadar's free Week in Tech newsletter
Get the hottest tech stories of the week, plus the most popular reviews delivered straight to your inbox. Sign up at http://www.techradar.com/register