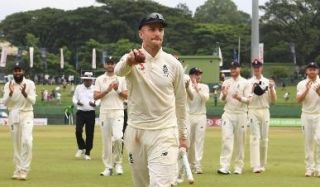 Let's face it - every Test match that England cricket team now plays before next summer feels like the road to the Ashes. Success in Sri Lanka is a good way to prepare and we'll tell you how you can watch Joe Root's men via a Sri Lanka vs England live stream.

Sri Lanka vs England Test series - when and where

The three Test series in Sri Lanka is underway, seeing the England cricket team trying to pick up a head of steam in to Ashes year. Each match starts at 10.30am local time - so 4.30am GMT - and the dates of the matches are as follows:

Sri Lanka hasn't always been a happy hunting ground for England, but they'll be buoyed by their convincing win in October's ODI series and a regulation victory in the first two Tests - an impressive whitewash is on the cards. The team has been impressive throughout the first two games, with the spin trio of Moeen Ali, Jack Leach and Adil Rashid taking most of the plaudits - and wickets!

For Sri Lanka, it's now about restoring some pride. They just haven't done their undoubted talent justice so far. Captain Dinesh Chandimal  and star man Angelo Mathews will surely be integral to any success the hosts may have in the third and final Test.

It's all poised to be a fascinating crescendo to the cricket Test series. So make sure you follow the instructions below to live stream the matches between Sri Lanka and England, wherever you are in the world.

Watch Test cricket from anywhere with a VPN

Live stream cricket with a VPN
Below we have details of where you can watch Sri Lanka vs England in certain territories. But even if there's no official broadcast where you live, there's still a way to watch. Use a VPN to dial in to a country that does have a stream to pick up their live video feed. A VPN is perfect for this as it allows you to change your IP address so you appear to be in a completely different location. We've tested hundreds of VPNs and can recommend these as the best three VPN services currently available:

1. Express VPN (comes with a 30 day money back guarantee)
This is the #1 rated best VPN in the world right now. You can watch on many devices at once including Smart TVs, Fire TV Stick, PC, Mac, iPhone, Android phone, iPads, tablets etc. Check out Express VPN and get 15 months for the price of 12.
2. IPVanish supports up to 10 devices, so great on the go.
3. VyprVPN: blazing speeds make VyprVPN a great choice for 4K video

How to watch England in Sri Lanka: UK live stream

If you're not already a Sky subscriber, don't despair as there is a way to watch without having to pay lots in a contract. You can get all the Sky Sports channels with a NOW TV pass for £7.99 for the day, or get four months for £20 with its current offer.

How to watch Sri Lanka vs England in Australia

The Australian broadcaster for the Test battles between Sri Lanka and England is Fox Sports, with the action starting at 3.30pm AEDT daily.

For those wanting to watch their Fox Sports subscription coverage overseas, you'll need to go down the VPN route as above.

How to watch Sri Lanka vs England: live stream in India

The Sri Lanka vs England matches will be shown on the Sony Network in India. Sony ESPN and Sony ESPN HD will have the action on the TV, while those hoping to stream on a computer or mobile device should head to Sony Liv.

How to watch Sri Lanka vs England in North America

Sorry US fans. Willow TV, the official cricket broadcaster for the USA and Canada, isn't showing the live coverage of Sri Lanka vs England in North America – although Willow will have highlights. The channel comes as part of numerous satellite and cable packages such as DirecTV and Sling.