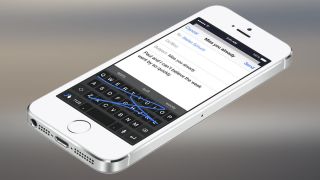 For years, iPhone, iPod touch and iPad owners have cast the green eye of envy in the direction of Android users, whose relatively more open operating system allowed for all manner of customization, including the ability to swap out software keyboards at the tap of a button.

With the release of iOS 8, Apple has finally enabled third-party developers to do the same. Aside from a few notable limitations (no access to built-in dictation among them), iPhone users now have the freedom of choice, but how do you find the right fit?

We tapped away at ten of the best third-party keyboard apps to find out what each has to offer, and our fingers still had enough energy left to type up our thoughts on which ones are worthy of the download.

One of the most beloved Android keyboards finally comes to iOS, delivering the same great autocorrection and predictive typing capabilities in a long list of languages, not to mention the ability to type in up to two dialects at once for bilingual types.

SwiftKey (Free) also includes a cloud sync option, which means Android users can jump over to iOS without leaving customized settings and personalized typing styles picked up from social networks behind.

Our biggest complaint is the absence of audible feedback: there's no satisfying click when tapping the keys, an option that can be turned on or off on the Android Lollipop version. Also, theme junkies are likely to be disappointed by the lack of choices, since there's currently no way to buy others.

Download this if... You're making the switch from Android

Avoid this if... You like a lot of custom themes or noisy keys

One of those time-saving utilities we can't live without on the Mac, TextExpander 3 ($4.99) finally lives up to its potential on iOS by allowing text snippets to be expanded from any app, along with a pretty capable third-party keyboard that makes it possible.

TextExpander has saved us thousands of keystrokes on OS X Yosemite by abbreviating commonly typed words into easy-to-remember shortcuts that expand like magic when entered. The iOS version does the same for frequently entered greetings, email signatures and more, tapping into Dropbox to keep snippets synced with the desktop.

One of our favorite TextExpander 3 features: the keyboard properly displays upper and lowercase letters, something Apple's built-in keyboard still hasn't managed to do after all these years. The keys are a little on the small side for our thick fingers, but otherwise this a flexible keyboard app worthy of a look.

Download this if... You want to save keystrokes with shortcuts

Avoid this if... You're on Windows or don't like smaller keys

Why type when you can Swype? Another popular Android keyboard making the leap to iOS is Swype ($0.99), which offers an alternative method for entering text by swiping across the keys. It's certainly not an approach that will appeal to everyone, but Swype has earned a place in the hearts of mobile typists around the globe.

And rightfully so: there's exhaustive support for tons of languages (including emoji for six of them), a variety of keyboard layouts (QWERTY, QWERTZ and AZERTY) and the ability to add or remove words from a personal dictionary.

Swype is also among the more customizable keyboard apps with five included themes, and a wide range of other colorful options available via in-app purchase. Of course, predictive typing is a given, and should you choose to tap on the keys instead, you'll get that satisfying click - along with the option to disable it in settings, should you prefer.

Download this if... You believe "hunt and peck" are three dirty words

Avoid this if... You'd rather type than swipe

Speaking of custom keyboards, Themeboard (Free) is like an App Store for third-party keyboards, offering designers and illustrators the opportunity to create new themes and share them with iOS users for fun or profit.

It's hard to imagine any other keyboard app offering such an exhaustive selection of digits to fit nearly every taste or style, and we weren't able to find a lemon in the group. A built-in Emoji Bar makes Themeboard even more useful without having to switch to a dedicated emoji keyboard when the need arises.

Themeboard hasn't overlooked the details, like three-speed quick delete which accelerates the longer the key is held down, and the ability to import shortcuts from Apple's own keyboard. With so many choices, there's bound to be something for everyone here.

Avoid this if... You already spend too much on in-app purchases.

When is a keyboard app not really a keyboard app at all? Clips (Free) is a full-featured iOS clipboard manager that allows iOS 8 users to clip content from other apps or web pages, then manage those snippets in the app and use them later to paste anywhere.

Clipped content can include text or images, and the Clips keyboard can even be used to filter which type of data gets pasted. For example, copied web links can be pasted as just a URL or as plain text with the title of the linked page, making Clips a pretty functional little utility for all your clipboard needs.

With a $1.99 in-app upgrade to the Pro version, Clips can even sync an unlimited amount of clipboard content across multiple iOS devices. And yes, before you ask, Clips also includes an actual keyboard, although the app is probably best used by switching between your favorite set of keys as needed.

Download this if... Your friends call you "Cut & Paste."

Avoid this if... You liked iOS better without copy & paste.