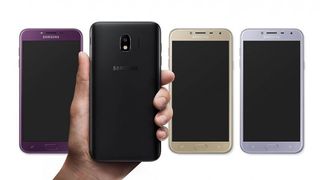 Korean smartphone maker Samsung has announced the launch of a new budget device in its J series, dubbed the Samsung Galaxy J4. The device was introduced last week and has now made its way to India. The device is available starting at Rs. 9,990 from offline retailers in the country.

While it is placed in the budget segment and not much can be expected from a budget device, the Galaxy J4 disappoints in terms of specifications. It features a 16:9 display, single cameras at both front and back and lacks a fingerprint sensor. These days, a 18:9 display, dual camera setups and fingerprint sensors are becoming more popular in the budget segment. Recently, Samsung had launched four budget and mid-range devices in its Galaxy J and Galaxy A series.

The Samsung Galaxy J4 runs on Android 8.0 Oreo and features a 5.5-inch HD Super AMOLED display with a resolution of 1280 x 720 pixels and an aspect ratio of 16:9. It will compete with devices like Xiaomi Redmi Note 5, Realme 1 and other recently launched devices that feature an 18:9 display.

“At Samsung, it is our constant endeavor to offer products and services that truly add value to the lives of our consumers. With 60 million plus devices sold & counting, Galaxy J series is India’s most popular smartphone series owing to the millennial focused meaningful innovation. Galaxy J4 comes packed with a host of new innovations like Advanced Memory Management, Adjustable Front LED Flash & Samsung Mall that makes it perfect for millennials,”