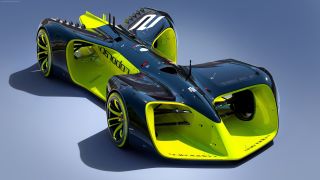 Formula 1 is a testbed for new technologies that eventually filter down to mass market production cars. That’s always been the way.

From more powerful and fuel efficient combustion engines to the kinetic energy recovery system found on modern electric vehicles, it all has its roots in the F1 race scene. With the next big step in road-going cars being driverless technology, however, something’s got to give.

With F1, where drivers are pretty key to the whole package, no longer able to act as the proving ground for new road technologies, a new series of autonomous race cars, dubbed Roborace, has cropped up.

With the new F1 season once again in full swing, the threat of a new race series looms large.

Well, at least on paper.

In reality, however, the new Roborace formula, which will piggyback on the Formula E series - itself pioneering tech unsuitable in F1 - is splitting opinion.

Drivers vs AI brings only one winner

Artificial intelligence is constantly improving – just look at the cheeky chappy of the digital assistant space, Amazon’s Alexa. No matter how sophisticated it becomes, however, we’re not at the point where AI can be as interesting, engaging, or as impulsive as a human.

In terms of piloting race cars that’s key, at least for the trackside spectators and those at home watching on TV. Despite describing the Robocars as “fascinating,” Mercedes-AMG’s Team Principle, Toto Wolff highlighted the importance of a human driver over AI as the key to exciting racing.

“We like the gladiators in the car. With that bit missing, it’s something completely different.”

“We don’t need that,” he said speaking exclusively with TechRadar. “It’s the drivers that are the heroes. It’s not about the cars, it’s about the drivers.

“You need to be proper warriors now in the car to wrestle these things around as they’re on the ragged edge, physically, mentally, everything. It’s exciting, and that’s the way things should be in F1.”

Rosberg isn’t alone in his views that drivers are key to the future of motorsport either. Former F1 racer and Sky Sports F1 commentator, Martin Brundle, added: “I don’t think it’s motorsport. I think that’s some kind of technology race, not motor racing.

“You can throw as many widgets as you like on your side pods, and most people glaze over. Take them to Max Verstappen’s home, however, and show him cuddling his mum, and they’ll love it.”

Echoing Brundle’s thoughts, one-time winner of the British F1 GP, Johnny Herbert chimed in: “Everybody I meet who goes to Silverstone to sit on the bank or sit in the grandstand to watch, they might have a Mercedes, Ferrari or Red Bull cap on, but they always say they are there to see Lewis or Hulkenberg or Kimi. It’s always about the drivers.

“I can’t see any excitement side to it, unless there’s entertainment and crashes go on.”

The difficulties of racing robots

It’s not just a lack of driver-based excitement and missing heroes that the Roborace series has to compete with, it’s the seeming lack of variety to the sport that appears to have created a repetitive rod for its own back.

“I’m intrigued, but if everything works to plan, you’re not really going to get much variation,” Sky Sports F1’s chief technical expert and pit lane reporter, Ted Kravitz, told us.

“It all seems to be just a demonstration of how clever the technology is. If everything works perfectly, they’re just going to go around together. Formula 1 is the human element as much as anything else, and always has been.”

His thoughts were echoed by former World Champion Damon Hill who added: “Sometimes we’re already accused of having a driverless race series.

“We’re at the point now where we have the capacity to automate everything so we now have to look at what the sport is looking to retain and what is the essence of the sport. I would argue that it’s the driver control factor.

“It’s also teams working without the ability to predict everything which is what they’d have there. They can predict it to within a tenth of a second per lap, so you’d almost know the result of the race before it’s even started.

“That’s not really what we want to know. We want to know how we as human beings can cope with difficult situations, and that’s the entertainment value.”

Despite widespread concerns, it’s not all naysayers and cynics. There are those who can see the benefits to a driverless race series. Even those from within the F1 fold.

“For the road it’s an important concept for the future that needs attention,” Rosberg explained. “Even I would like the occasional driverless car because sometimes I just don’t want to be driving.

“I want to relaxing in the back, sleeping or working, or using the time. For that it would be very valuable.”

Ultimately, this is the need for the series. Driverless technologies have been creeping forward for years, always tested in carefully controlled environments and rarely pushing the limits of the tech. The competitive element and high speeds of race series can change this.

This has already been shown by the cars themselves. The first competitive Roborace race took place earlier this year between two automated cars. Ironically, and almost predictably, it ended with a crash.

This is key because it’s the sort of software bugs that need to be worked out before autonomous vehicles are let loose on public roads.

Roborace organisers are open that their goal is to accelerate driverless car technologies, but they’re also keen to bring an element of entertainment to proceedings too. Those designs are as much about drool-inducing appeal as aerodynamics, and the achievable speeds without the risk of human fatality will quickly let the cars move beyond F1.

“We want people to see this like a Tron, or an Oblivion, or a Star Wars spaceship,” Justin Cooke, Roborace’s chief marketing officer said at MWC. He’s not averse to things going wrong and cars crashing either, stating: “We don’t learn as much when we do perfect runs.”

It’s not just artificial intelligence that the Roborace series is helping to develop either, with machine learning also getting a look in. As well as letting engineers program in a set of parameters, the series permits the cars to learn the track for themselves, gradually building speed and using a myriad sensors to find the balance for the perfect lap.

“We’re giving them a blank canvas, and the only competitive advantage is their code, making it a truly level playing field,” Cooke said in a recent interview. “It’s not about how much money you can spend in a wind tunnel, it’s a competition of intelligence. This is about who are the smartest engineers in the world.”

It’s not just the practicality of advancing driverless car technology that people see the benefit in either.

“I think it’s brilliant because drivers have been the bane of my life,” renowned F1 engineer Pat Symonds joked.

On a more serious note, the man who has previously designed the cars for the Williams, Benetton, Renault and Virgin F1 teams added: “I caution against just writing off the autonomous racing. If you look at drone racing which is pretty similar, the popularity of that is just staggering.

“It’s not motor racing, but it’s not something that’s going to go away.”