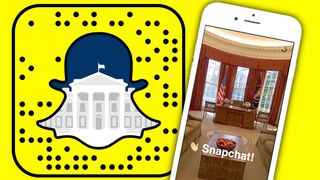 In an effort to get the nation's whippersnappers into politics, the White House has jumped on Snapchat.

By adding the username "WhiteHouse" on the picture-sharing social media platform, Snapchat users will be able to check out images and videos of the goings-on at the US president's pad.

As of right now, the most recent posts include the backroom of a press conference and a glimpse inside the Oval Office, with promises of a behind-the-scenes scoop during tomorrow's State of the Union address.

"There are over 100 million daily active Snapchat users, and over 60% of American smartphone users between the ages of 13 and 34 use the platform," said Director of Product Management Joshua Miller on the White House's official webpage. "The White House is joining Snapchat to engage this broad cross-section of the population in new and creative ways."

Snapchat isn't the only platform the Prez has recently signed up for, with an official presidential Twitter and Facebook page cropping up on social media timelines.

Unfortunately, Snapchat's recent removal of paid special effect lenses means we may not be treated to selfies of Barack Obama with anime eyes or heat vision, but if Snapchat will get more youngsters engaged with politics, we'll take it.